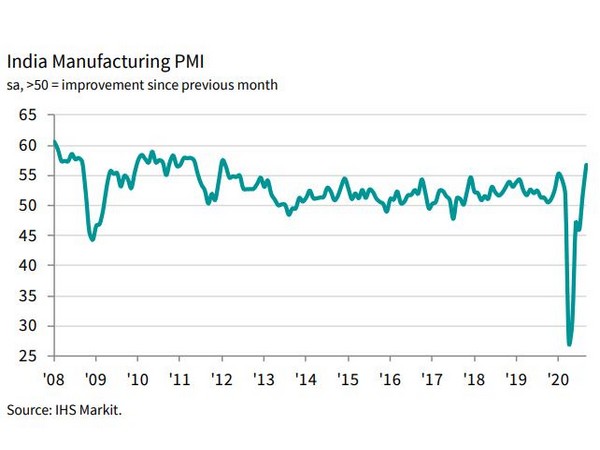 The PMI reached its highest mark since January 2012, supported by accelerated increases in new orders and production.

Concurrently, there were renewed expansions in export sales and input stocks as well as an improvement in business confidence. Output prices rose for the first time in six months, reflecting an uptick in input costs.

The headline seasonally adjusted IHS Markit India Manufacturing PMI increased from 52 in August to 56.8 in September, signalling back-to-back improvements in the health of the sector. Moreover, the latest reading was the highest in over eight-and-a-half years.

Amid reports of loosened coronavirus disease 2019 (COVID-19) restrictions and higher demand, Indian manufacturers lifted output for the second straight month in September. The increase was sharp and the third-quickest in the history of the survey.

Similarly, there were back-to-back increases in new business inflows. The rate of expansion picked up to the fastest since early-2012.

The upturn in total sales was supported by a renewed expansion in new export orders, the first since prior to the escalation of the COVID-19 outbreak.

Despite strong growth of order book volumes, Indian goods producers signalled another reduction in payroll numbers. In many cases, this was attributed to efforts to observe social distancing guidelines. Employment has now decreased for six consecutive months.

“Due to loosened COVID-19 restrictions, factories went full steam ahead for production, supported by a surge in new work. “Exports also bounced back, following six successive months of contraction while inputs were purchased at a sharper rate and business confidence strengthened,” she said.

Almost one-third of manufacturers expect output growth in the coming 12 months against 8 per cent that foresee a contraction, resulting in the strongest degree of overall optimism in over four years.