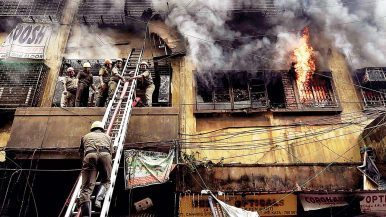 Kolkata’s Bagree Market fire: Over 60 firefighters have been pressed into service as the blaze spread to other parts of the market, in congested Canning Street. The firefighters are still trying to control the fire by spraying water on the building from six directions

Over twenty-four hours later, the fire that began at Kolkata’s Bagree market continues to rage. Over 60 firefighters have been pressed into service as the blaze spread to other parts of the market, located in congested Canning Street. No casualty has been reported, but the operation has left two firefighters injured.

Poor fire safety measures and inflammable material stashed in the five-storey building posed a serious hindrance while dousing the fire. A senior police officer, who visited the area, said the situation has improved Monday and firemen are still working to tame the flames. It may take several hours more to fight the fire, a senior official of the fire department told PTI.

Goods estimated to be worth crores turned to ash and several shops in the market — considered one of the country’s largest wholesale hubs — were gutted, said police sources. According to the police, the fire broke out at around 2.30 am on the first floor of the building, and quickly spread to the floors above. As many as 30 fire tenders were rushed to the spot within half an hour, but the narrow lanes and mesh of overhead wires made it a difficult operation. The area was also enveloped in thick, black smoke.

No one was present in the building when the fire broke out, and a few security guards who lived on the top floor were reported to have escaped in time. Disaster management and civil defence teams were also pressed into action.

Firefighters used gas cutters to cut through the shutters and grilles to get access from outside. The fire personnel also sprayed water on the adjacent buildings, to control the fire from spreading to neighbouring buildings.

Fire Minister and Mayor of Kolkata Municipal Corporation (KMC) Sovan Chatterjee said, “We have sent notices, held meetings with traders and businessmen pleading with them to install adequate firefighting systems in buildings, including the Bagree market. Had they listened to us, this would have been avoided.”