Home All News 8 Lives Lost Due To Floods At Himachal, Red Alert Declared In... 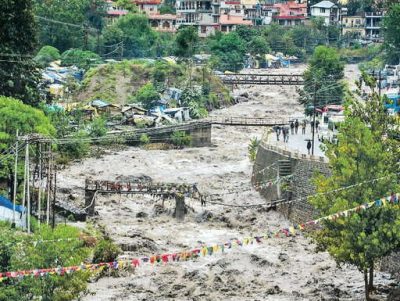 ChiniMandi (25 Sept): The continuous rainfall causing floods in North India has already claimed 11 lives. Red Alert has been issued in Punjab. Jammu & Kashmir, Himachal Pradesh, Haryana are among flood-affected states.
Himachal Pradesh itself has lost 8 lives already due to the flood. The rain hasn’t stopped in last 3 days.
Farmers have come under the pressure as crops are damaged across the areas. Due to the threat of river breaking their banks, Punjab CM Amarinder Singh on Monday ordered to close all the colleges and schools.
A state government spokesman said that the Army has been asked to remain on alert to help the state deal with any eventuality arising out of the situation.
By today afternoon more than 49,000 cusecs of water will be set out from Pong Dam at Himachal Pradesh’s Kangra district as the water level is soon to reach danger mark, an official told.