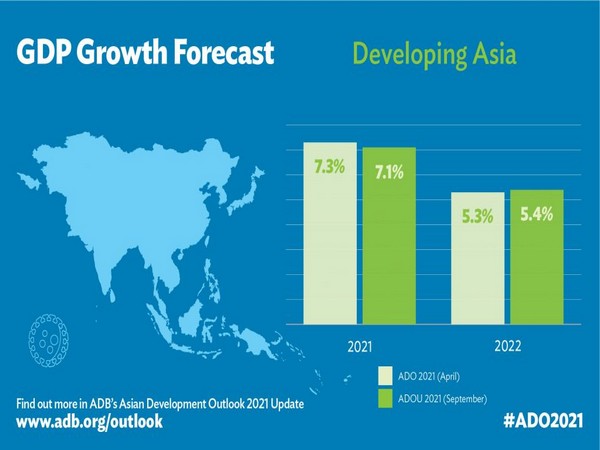 Manila [The Philippines], September 22 (ANI): The Asian Development Bank (ADB) on Wednesday downgraded its 2021 economic growth outlook for India — the subregion’s largest economy — to 10 per cent from 11 per cent in 2021.

However, it said the outlook for next year has improved to 7.5 per cent from 7 per cent.
The ADB lowered its 2021 economic growth outlook for developing Asia amid continuing concerns over the coronavirus disease (Covid-19) pandemic.

It forecasts growth of 7.1 per cent this year, according to an update of its flagship economic publication, Asian Development Outlook (ADO) 2021. That compares with a projection of 7.3 per cent in April.

The growth outlook for 2022 is raised to 5.4 per cent from 5.3 per cent. New Covid-19 variants, renewed local outbreaks, the reinstatement of various levels of restrictions and lockdowns, and slow and uneven vaccine rollouts are weighing down the region’s prospects.

“Policy measures should not only focus on containment and vaccination, but also on continuing support to firms and households and reorienting sectors in the economy to adapt to a ‘new normal’ once the pandemic subsides to kickstart the recovery,” he said.

Covid-19 cases in developing Asia have risen since the Delta variant of the virus emerged in April. New daily cases peaked at 430,000 in May. More than 163,000 new daily cases were recorded on August 31.

Meanwhile, vaccination progress in developing Asia remains uneven and lags behind that of advanced economies. As of August 31, 28.7 per cent of the region’s population had full vaccine protection compared with 51.8 per cent coverage in the United States and 58 per cent in the European Union.

The recovery path within the region remains uneven. East Asia’s growth forecast for this year has been raised to 7.6 per cent from 7.4 per cent in April as a surge in global demand fuels exports from the region.

ADB expects economic growth of 8.8 per cent in South Asia this year compared with the 9.5 per cent forecast in April for the subregion. However, the outlook for 2022 has improved to 7 per cent from 6.6 per cent.

The forecasts for Southeast Asia and the Pacific have also been revised downward, as economies in these subregions continue to grapple with new virus variants, continued lockdowns and restrictions, and slow vaccine rollouts.

The Pacific’s economy is set to contract 0.6 per cent this year compared with 1.4 per cent growth projected in April before expanding 4.8 per cent in 2022.

Inflation in developing Asia is expected to remain in check at 2.2 per cent this year and 2.7 per cent in 2022. The current trend of higher international commodity and food prices could stoke inflation in some of the region’s economies. (ANI)
To receive ChiniMandi updates on WhatsApp, please click on the link below.
WhatsApp Group Link