Home All News Ahead Of Polls, Over 12 Lakh Farmers To Get Free Electricity In... 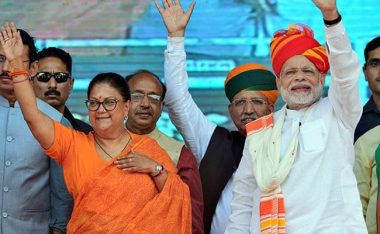 JAIPUR: Rajasthan Chief Minister Vasundhara Raje yesterday announced free electricity for farmers up to Rs. 10,000, hours before the Election Commission announced schedule for upcoming Assembly elections in the state.
Addressing a public meeting in Ajmer, in the presence of Prime Minister Narendra Modi, the Chief Minister made the announcement.

According to the announcement, more than 12 lakh farmers of the state will receive free electricity up to Rs. 10,000 for a year on their agricultural electricity connection.

The scheme will be effective from November 2018 billing month for the general category rural farmers.

This benefit will be available in the form of grants through Direct Benefit transfer (DBT), confirmed officials of the Rajasthan Energy Department.

The farmers will have to pay the bill first, after which a maximum amount of Rs. 833 per month shall be deposited in their bank accounts, explained the officials.

The Energy Department has already issued orders to the power distribution companies in Jaipur, Ajmer and Jodhpur.

Meanwhile, former Chief Minister Ashok Gehlot has flayed Chief Minister Raje for her bid to “lure” farmers, saying she is reminded of their issues when it is time for her “vidai” (departure).

She announced free electricity for farmers only after the Congress announced to give free power to farmers at “Charbhuja Kisan Sammelan”, he claimed.

“What’s the meaning of making this announcement an hour before the implementation of code of conduct by this outgoing government?” Mr Gehlot asked, adding: “Why she didn’t give free electricity to farmers in her five-year tenure?”

He said in its five-year tenure, the Bharatiya Janata Party (BJP) government increased the electricity tariff three times and despite this, it failed to provide sufficient power to them.

3 COMMENTS
“Farmers will not be lured by this announcement,” he added.