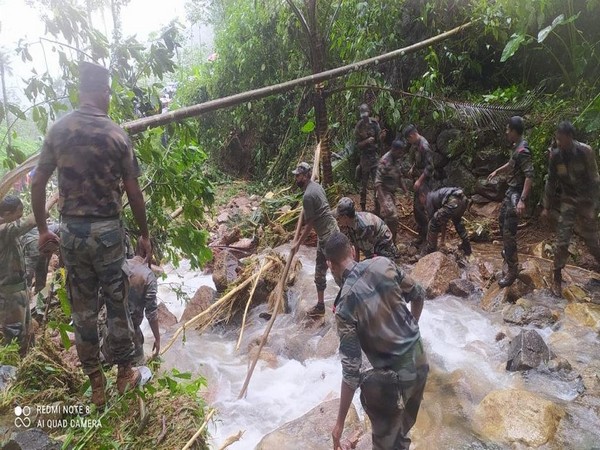 Kottayam (Kerala) [India], October 17 (ANI): The Indian Army was once again at the forefront of the massive rescue and relief operations launched in aid to civil administration in Kerala’s Kottayam amid a flood-like situation triggered by heavy rains in the district.

According to a statement issued by the Indian Army, 40 Indian Army personnel from Pangode Military Station was the first rescue team to be deployed at the site in Kavali in Kottickal of Kottayam district of Kerala which had witnessed the loss of lives and heavy damage to property from the thunderstorms since early Friday.
It further stated that one Column of Army personnel from DSC Centre, Kannur with engineering and medical components arrived at Wayanad and commenced the rescue operations.

Another specialist Engineering Task Force (ETF) under Headquarters Dakshin Bharat Area from Bengaluru arrived at Mundakayam and Koottickal. A total of three columns have been deployed by the Army so far, it said.

The statement further said that despite the harsh and inclement weather conditions the Army reached the spot within few hours of requisition and have been since employed in assistance to the civil administration in rescue and relief operations in the area. Working since the late hours, the team was the first to reach the site at Kavali and have been successful in recovering three bodies from the debris, it added.

The Indian Army said in its statement that during the process of recovery, the team had salvaged a large quantity of gold and expensive accessories which were immediately handed over to the Civil administration for further accountability.

It also mentioned that the team have also been clearing and managing the traffic on the roads and diverting the flow of water into streams thereby ensuring the unhindered movement of rescue materials.

The team is working in close coordination with the DC, Kottayam and the Tehsildar of Kanjirapally in the distribution of the much-needed relief material and in ensuring that normalcy returns in the area at the earliest, it added. (ANI)
To receive ChiniMandi updates on WhatsApp, please click on the link below.
WhatsApp Group Link

Sugar mills not coming forward to sign further export contracts due to fall in...

ChiniMandi - Friday, 3 December 2021
The exporters are not in mood to sign contracts further as the present rate of 18.6 cents are not appealing, said ISMA. They may enter into contracts e the world prices increase to about 21 cents per pound, the association said.

Priyanka Gandhi assures to hike sugarcane price to Rs 400 per quintal if voted...

Vivek Waghmode - Friday, 3 December 2021
“Apart from this we will increase sugarcane purchase price to Rs 400 per quintal so that this will help in increasing the income of sugarcane farmers,” she said.