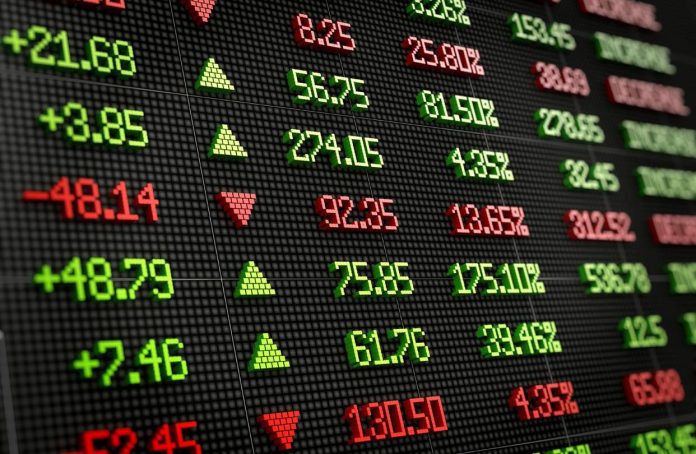 Markets ticked higher in see-saw trade today, propped up by gains in auto, realty, capital goods and energy counters amid a mixed trend overseas.
The BSE Sensex rebounded over 83 points to close at 35,657.86, while the broader NSE Nifty rose 22.90 points to 10,772.65.
Indices benefited from bargain-hunting in recently battered stocks, brokers said.
Asian markets ended mostly higher even as investors monitored developments on the trade front in the aftermath of tit-for-tat tariffs by the US and China.
The 30-share Sensex, after a negative opening, slipped to the day’s low of 35,532.21, but staged a strong comeback in the later part of the session to hit a high of 35,799.71. It finally finished 83.31 points, or 0.23 per cent higher at 35,657.86.
The NSE Nifty, after shuttling between 10,735.05 and 10,816.35, ended at 10,772.65, up 22.90 points, or 0.21 per cent.
Both the Sensex and Nifty posted weekly gains, rising 234.38 points, or 0.66 per cent, and 58.35 points, or 0.54 per cent, respectively.
Meanwhile, foreign portfolio investors (FPIs) sold shares worth Rs 159.37 crore on net basis, while domestic institutional investors (DIIs) also sold equities to the tune of Rs 296.97 crore yesterday, provisional data showed.
“Market showed signs of stability as improving outlook on auto and consumption oriented sectors lifted the sentiment. However, emergence of profit booking towards end on account of continuing trade tensions led the indices to end with marginal gain.
“Meanwhile, rupee traded in a narrow range while gradual fall in oil price & 10-yr yield will provide support to the market,” said Vinod Nair, Head of Research, Geojit Financial Services.
IT bellwether TCS spurted 1.68 per cent to its lifetime high of Rs 1,913.30 ahead of its June-quarter results on Tuesday.
Hero MotoCorp topped the gainers’ chart in the Sensex pack, rallying 4.25 per cent, followed by Tata Motors at 3.69 per cent.
Other winners were Bajaj Auto 1.80 per cent, M&M 1.59 per cent, RIL 1.19 per cent, L&T 1.05 per cent, Yes Bank 1.03 per cent, Adani Ports 1.02 per cent, Axis Bank 0.66 per cent, Kotak Bank 0.47 per cent, Coal India 0.43 per cent, SBI 0.33 per cent, Tata Steel 0.12 per cent and Asian Paints 0.07 per cent.
However, Sun Pharma lost 1.28 per cent, NTPC 1.22 per cent, HDFC Ltd 1.11 per cent, Wipro 0.75 per cent, Vedanta 0.72 per cent, ICICI Bank 0.59 per cent and ONGC 0.45 per cent, among others.
Coming to sectoral indices, auto rose 1.39 per cent, realty 1.27 per cent, capital goods 1.16 per cent, energy 1.01 per cent, PSU 0.83 per cent, oil and gas 0.72 per cent, infrastructure 0.47 per cent, IT 0.44 per cent, teck 0.34 per cent, power 0.18 per cent, metal 0.07 per cent and bankex 0.05 per cent.
Healthcare, consumer durables and FMCG indices ended lower by up to 0.75 per cent.
Broader markets were in a better shape, with the BSE mid-cap and small-cap indices gaining 0.56 per cent and 0.46 per cent.
On the global front, investors monitored trade developments following escalation of tensions between the US and China.
The US is set to impose a 25 per cent tariff on USD 34 billion worth of Chinese goods from more than 800 product categories. China has also announced that it will retaliate with duties of the same value on US products.
In Asia, Japan’s Nikkei rose 1.22 per cent, Shanghai Composite Index gained 0.49 per cent and Hong Kong’s Hang Seng advanced 0.47 per cent. However, Singapore fell 1.99 per cent and Taiwan 0.03 per cent.
European shares opened in the positive territory. Frankfurt’s DAX gained 0.30 per cent, while Paris CAC 40 rose 0.40 per cent in early trade. London’s FTSE edged up 0.30 per cent.
US markets closed higher overnight following a rally in the technology sector.
Meanwhile, the minutes of the US Federal Reserve June policy meeting were in line with market expectations for further interest rate increases this year.