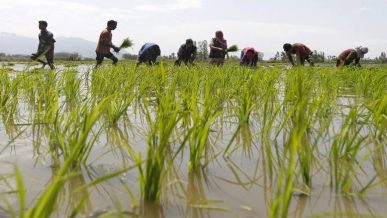 In the budget this year, the government had announced that it will put in place a fool-proof mechanism to ensure minimum support price (MSP) to farmers. It had asked think-tank Niti Aayog to suggest a mechanism in consultation with the union agriculture ministry and states. “The PM-AASHA is aimed at ensuring remunerative prices to the farmers for their produce as announced in the Union Budget for 2018. This is a historic decision,” Agriculture Minister Radha Mohan Singh told reporters after the Cabinet meeting. Under the PM-AASHA, states would be allowed to choose from three schemes — existing Price Support Scheme (PSS), newly designed Price Deficiency Payment Scheme (PDPS) and Pilot of Private Procurement Stockist Scheme (PPSS)– to undertake procurement when prices of commodities fall below the MSP level, he said.

The Cabinet has sanctioned Rs 15,053 crore to implement the PM-AASHA in the next two financial years, of which Rs 6,250 crore will be spent this year. That apart, the credit line for procurement agencies has been enhanced by providing additional government guarantee of Rs 16,550 crore, taking the total to Rs 45,550 crore. The government mentioned that the PDPS is on the lines of Madhya Pradesh government’s Bhavantar Bhugtan Yojana (BBY), but will protect oilseeds farmers only.

Under the PDPS, the government will pay to growers the difference between the MSP and monthly average price of oilseeds quoted in wholesale market. This would be implemented for up to 25 per cent of the oilseeds production in a state.
The price difference will be made to pre-registered farmers selling the produce in the notified market yard through a transparent auction process. “This scheme does not involve any physical procurement of crops and the central government will give support for the PDPS as per the norms,” the statement said. Besides this, the states are given an option to rope in private players for oilseeds procurement on a pilot basis in eight districts.

Under the new policy, the states will also have an option to choose the existing Price Support Scheme (PSS), under which central agencies procure commodities covered under the MSP policy when prices fall below the MSP. “The states can choose either PSS or PDPS or PPSS to ensure MSP to farmers,” Singh said adding that this is an unprecedented step taken by the government to protect the farmers’ income which is expected to go a long way towards the welfare of farmers. The other existing procurement schemes being implemented for procurement of paddy, wheat and nutri-cereals/coarse grains as well as commercial crops such as cotton and jute will be continued for providing MSP to farmers.

The new policy comes ahead of 2019 general elections most likely to be held in April or May next year, when the harvesting and procurement of rabi (winter) crops like wheat would begin. The tenure of the NDA government will end on May 26, 2019. Already, there is growing farm distress due to fall in prices of some commodities because of bumper crop in 2017-18 crop year that ended last month. This year’s crop is also expected to be higher on good rains. The agriculture minister further said that the government is committed to realising the vision of doubling farmers’ income by 2022. The emphasis is on enhancing productivity, reducing cost of cultivation and strengthening post-harvesting management, including market structure. Several market reforms have been initiated by the government, he added.Under the MSP policy, the government fixes the rates for 23 notified crops grown in kharif and rabi seasons.