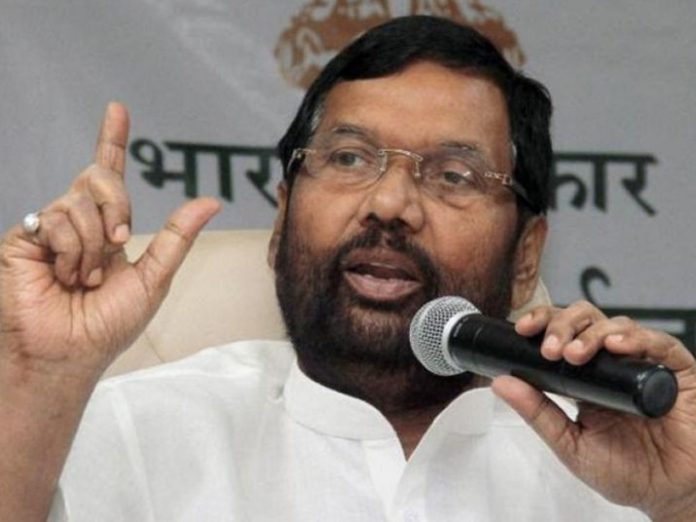 New Delhi, May 9 (ANI): Union Minister for Consumer Affairs Ram Vilas Paswan on Friday categorically stated that public distribution system cannot be extended to those outside it as it would be akin to opening a Pandora’s box. Paswan said he can’t afford to open a Pandora’s box and used the example of trains plying for migrant labourers while responding to Congress leader Rahul Gandhi’s suggestion that 11 core people outside PDS should be given food security.

“Take the example of trains for migrants. There are fights in trains today. We can’t do this with PDS,” stated Paswan. Rejecting Gandhi’s suggestion of providing delivery of 1kg sugar, 10 food grains and one kg pulses to every individual every month for a period of the next six months, Paswan termed it a policy matter.

“We are working according to the Food Security Act and we can’t afford to open a Pandora’s box. What will be the criteria for deciding on beneficiaries, even if we make a policy? Next year 2021 we will have a new census. Despite this state governments should prepare beneficiaries list and put that on the portal for future use,” said Paswan. Paswan assured that the ministry will buy each and every grain from farmers. “We can’t however, open purchasing centre. State governments should procure and we will compensate. According to the Food Security Act, we procure products and I am sure Rahul Gandhi knows this,” said Paswan.

The minister also briefed about one nation one ration card scheme and that 17 states have already digitalised ration cards and by next year all states would have this facility.
“We have already covered 17 states and by next year every state should be covered. “We need some things in place for one nation one card like digitalisation of ration cards we have completed, linkage with Aadhar, which is 90 per cent complete and beneficiaries too have been linked, point of sale machines should be made available for the scheme to be in place,” stated Paswan.

The minister also requested states to distribute ration procured from the Centre and explained that Centre is not giving damaged grains to states. He also said that Centre is disbursing three-month ration and meeting specific demands by the states regarding grains and pulses.

ChiniMandi - Wednesday, 1 December 2021
Sources told ANI that the increased price of LPG cylinders is effective from today. This is the second-highest price of 19kg commercial cylinder after 2012-13 when it used to cost around Rs 2,200 per cylinder. However, there is no increase in prices of other domestic cylinders weighing 14.2kg, 5 kg, 10kg composite or 5kg composite cylinders.