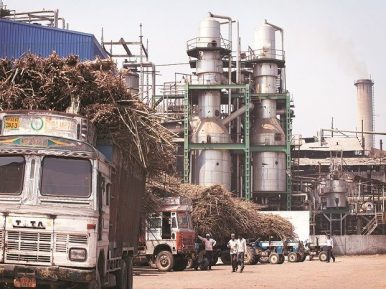 New Delhi, Sep 18 (PTI) Fair trade regulator CCI Tuesday imposed a total penalty of Rs 38.05 crore on 18 sur mills and two trade associations for bid rigging with regard to a joint tender floated by oil marketing companies (OMCs) for procuring ethanol for blending with petrol.
Besides, the regulator also directed the sugar mills and the associations – Indian Sugar Mills Association (ISMA) and Ethanol Manufacturers Association of India (EMAI) – to “cease and desist” from indulging in conduct that has been found to be in contravention of Section 3 of the Competition Act.
Section 3 pertains to anti-competitive agreements.
The sugar mills, which have been penalised, include Bajaj Hindusthan (Rs 12.35 crore), Simbhaoli Sugars (Rs 2.29 crore), Avadh Sugar & Energy (Rs 3.72 crore), Balrampur Chini Mills (Rs 4.28 crore), Mawana Sugars (Rs 2.45 crore), Dalmia Bharat Sugar & Industries (Rs 3.92 crore) and Andhra Sugars (Rs 1.65 crore).
ISMA has to pay Rs 46.94 lakh and EMAI has been fined Rs 22,000.
“While imposing penalties, the Commission applied the principle of relevant turnover and based the penalties on the revenue generated by the sugar mills from sale of ethanol only,” an official statement said.
On sugar mills, the penalty has been imposed by the Competition Commission of India (CCI) at an interest of 7 per cent of their average relevant turnover. For the associations, the fine is 10 per cent of their average receipts “keeping in view the key role they played in facilitating bid rigging”.
The OMCs — Indian Oil Corporation Ltd, Hindustan Petroleum Corporation Ltd and Bharat Petroleum Corporation Ltd — had invited quotations from alcohol manufacturers for supply of ethanol through a joint tender in January 2013. The supply was to be made available to their various depots and terminals across the country for a period of one year from March 2013.
Among others, it was alleged that the sugar manufacturers who had participated in the joint tender manipulated the bids by quoting similar rates and in some cases identical rates through an understanding and collective action.
“The Commission in its order noted that the bidders through their impugned conduct have contravened the provisions of… the (Competition) Act by acting in a collusive and concerted manner which has eliminated and lessened the competition besides manipulating the bidding process in respect of the impugned tender floated by OMCs.
“The bidders who participated in respect of the depots located in UP, Gujarat and Andhra Pradesh in response to the joint tender floated by OMCs, were found to have acted in a concerted and collusive manner in submitting their bids,” the statement said.
According to a 126-page order, ISMA and EMAI violated the provisions of Section 3 by providing their platforms to sugar mills in facilitating rigging of the tender.
The CCI order has come on separate complaints filed by India Glycols, Ester India Chemicals, Jubilant Life Sciences, A B Sugars, Wave Distilleries and Breweries and Lords Distillery.
Noting that since the sugar mills had prima facie participated in the bidding while colluding with each other, the regulator in 2013 had directed its investigating arm — the Director General (DG) — to probe the matter.
“Finally, the Commission notes that some of the parties had filed both confidential as well as non-confidential versions of their replies/ objections/ responses/ submissions,” the order said.
“The confidential versions were kept separately during the pendency of the proceedings. It is ordered that confidentiality claim, as prayed for, shall hold for a further period of 3 years from the date of passing of this order in respect of confidential versions which have been filed before the Commission from time to time and on which confidentiality was claimed,” it added.