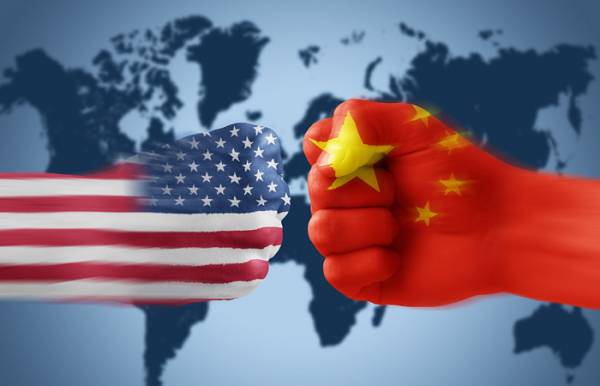 China today struck back against US President Donald Trump’s trade offensive, intensifying the expanding and unpredictable dispute between the world’s two largest economies.
China announced it was expanding its existing complaint against the United States at the World Trade Organisation, hours after the countries slapped tit-for-tat tariffs on billions of dollars of cross-border trade.
Beijing called the new stage of the confrontation — which began when Washington pulled the trigger on 25 percent duties on USD 34 billion annual imports of Chinese machinery, electronics and other goods — “the largest trade war in economic history.”
China’s foreign ministry said retaliatory tariffs of equal size and scope had taken effect “immediately.” There was confusion about exactly what US products would be hit in the initial wave of tariffs as China’s Commerce Ministry had not published an updated list.
Economists have warned escalating trade frictions could throttle global growth and strike at the heart of the world trading system, causing shockwaves across the planet and potentially disrupting years of economic growth.
US trade data released today showed exporters hit a record, as importers bumped up purchases, particularly of tariff-targeted US soy beans, to build up supplies before the new duties hit.
Analysts said this was the quiet before the storm, with US exports likely to fall off in the third quarter as both sides feel the effects of worsening trade relations.
The new tariffs could just be the opening skirmish in the trade war, as US President Donald Trump has vowed to hit as much as $450 billion in Chinese goods, the vast majority of that country’s imports.
That would add to disputes underway with Canada, Mexico and the European Union, which could worsen if he goes ahead with threatened tariffs on autos.
China’s government also announced it was adding this round of tariffs to an existing complaint filed with the WTO in April shortly after Washington unveiled the threat to punish Beijing for its policies on intellectual property.
Months of dialogue between the two economic superpowers, including in the WTO, appeared to have failed, with Trump warning just hours before the tariffs came into effect that Washington was ready to escalate the dispute with duties on hundreds of billions of dollars more in Chinese imports.
Trump repeatedly has slammed what he describes as Beijing’s underhanded economic treatment of the United States. The US trade deficit in goods with China ballooned to a record USD 375.2 billion last year, stoking his ire.
US officials accuse China of building its industrial dominance by stealing the “crown jewels” of American technological know-how through cyber-theft, forced transfers of intellectual property and state-sponsored corporate acquisitions.
Despite dire warnings about the impact on the US, Trump believes the robust American economy can outlast its rivals in the current battle.
But China also believes its economy, with a greater focus on domestic demand and a reduced dependence on exports, can ride out the storm.
A member of China’s central bank monetary policy committee, Ma Jun, said the first punches will have a “limited impact” on the nation’s economy and would only trim GDP growth by 0.2 percentage points.
With only USD 130 billion in US imports to retaliate against, Beijing has said it will take “qualitative” and “quantitative” measures against the US, triggering fears it could cripple the operations of US multinationals operating there.
Beijing has accused the US of “firing on the whole world” with the measures, pointing out that most of the Chinese exports under attack are largely made by companies with foreign investment — including from America.
China’s Premier Li Keqiang said on a visit to Sofia that “A trade war benefits no-one because it hurts free trade and the multilateral process.” – Russia joins the fray –
Global markets initially wobbled at the news but soon forged higher with Wall Street boosted by bullish employment numbers while Asian and European stocks also cast aside their worries, at least temporarily.
With stock markets uneasy, Li Daxiao, analyst at Yingda Securities, said news of the tariffs was already priced into the market, “therefore investors are not in as much of a panic as before.” On the streets of Beijing, there were some concerns that prices would rise due to the tariffs but also a determination to support the Beijing authorities in the trade war.
“I will try my best to support domestic products. I think products made in China are the best,” said one shopper in a Beijing grocery story, who gave his name as Yang.
Moscow also announced Friday it had slapped 25 percent tariffs on some US goods, joining the global push-back against Trump’s offensive.
And signs are growing that the escalating global trade dispute is already affecting the world’s top economy, driving up prices and disrupting supply chains.
As the tariffs approached, the US central bank warned the impending trade battle was beginning to darken the otherwise blue skies of the robust American economy, now entering its 10th year of recovery.