The London sugar contract Z-20 expired on Friday at 618,300 tonnes and has been amongst the largest deliveries and seemingly quite engrossing with the origins.

According to the reports of Paragon Global Markets, LLC, New York, the spread of not only Dec/March, but of March/May exploded. March/May jumped $7.7 for the week to close at $11.20. The deliveries summed to 12366 lots with ED&F Man & Wilmar as receivers and Tereos, Sucden and Antei the deliverers.

Commenting on the delivery, Mr. Micheal Mc Dougall, – Managing Director at Paragon Global Markets said, “Moderna’s vaccine study released some positive news and announced that the efficacy was even better than Pfizer, with 94.5%. There is talk that distribution could begin as early as the second half of December. However that would be to a select few, elderly and/or health care workers. More wide distribution could be only later in April, and kids even later, around June or July. The Dow jumped slightly over 1% and missed 30,000 by one point. Crude oil jumped $0.75 a barrel. and the dollar index fell, but not significantly.

Algerian sugar has been delivered in the past, but the last time was for the August 2018 contract when 39,900 tons were delivered. In fact the 197,800 delivered was larger than we have seen in the last four years (combined) from them.

Guatemala saw 230,500 tons delivered where the average loading rate per weather working day is 3,500mt. If the port is exclusively for that operation, it will require 60 days or so to load this tonnage. Guatemala is also dealing with excessive rain from la Nina and now a hurricane impacting Central America (Nicaragua and Honduras) which could “complicate” things.”

“Indian sugar was going to be delivered, but with no subsidy yet, Indian sugar is fetching a premium, which could explain why we saw the spread jumping as someone thought better and covered the Indian delivery.” He further added. 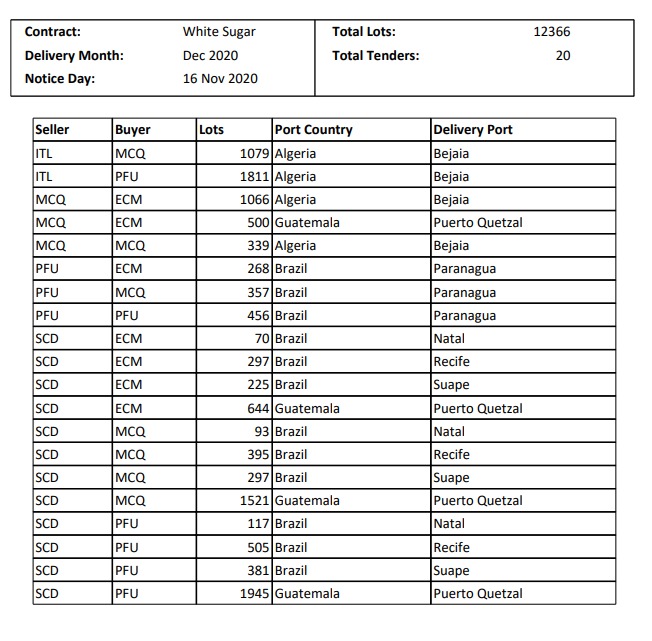