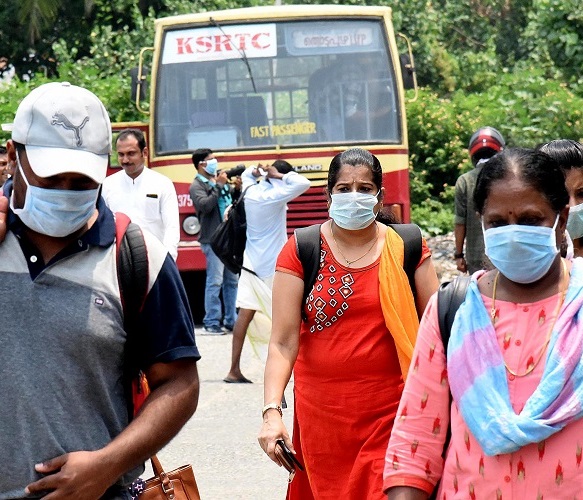 New Delhi: In a bid to contain the spread of coronavirus, Prime Minister Narendra Modi announced total lockdown in India for 21 days. With this attempt, India hopes to curb the spread of Covid-19 infection. Coronavirus cases are growing rapidly in India and across the world.

The coronavirus which had first emerged in China’s Wuhan city in December last year and has now spread across many countries in the world.

Follow Live Updates Here:
20:18 IST: Total positive COVID-19 cases in India reaches 606: Health Ministry
The total number of positive coronavirus cases in India have climbed to 606, said Ministry of Health and Family Welfare on Wednesday.
The total number of active COVID-19 cases in the country so far stands at 553, while the number of people who have been cured or discharged stands at 42. Ten people have died from the disease while one case has migrated, the Ministry further informed.

Meanwhile, Prime Minister Narendra Modi on Tuesday announced a 21-day lockdown in the entire country to deal with the spread of coronavirus, saying that “social distancing” is the only option to deal with the disease, which spreads rapidly.

19:33 IST: 9 new positive coronavirus cases confirmed in Kerala, says CM
Kerala Chief Minister Pinarayi Vijayan on Wednesday confirmed nine new COVID-19 positive cases in the state.
“Out of the nine people who have been tested positive for COVID-19, four have returned from Dubai, one from the UK and one from France,” said Vijayan in a statement. With this, the total number of COVID-19 cases has reached 118 in the state.
According to the Ministry of Health and Family Welfare, the total number of positive COVID-19 cases in India reached 606, including 43 foreign nationals

“The federal and provincial governments are working together,” Special Assistant to Prime Minister Hafeez Sheikh said, as reported by DAWN. On Tuesday, Leader of the Opposition in the National Assembly and PML-N President Shehbaz Sharif on Tuesday urged Prime Minister Imran Khan to call a meeting of the Council of Common Interests (CCI) to address the current coronavirus outbreak.

He also offered the government various solutions for combating the economic fallout of the novel coronavirus in the country.

He proposed slashing the interest rate by three to four per cent. He further proposed to double the salaries of medical staff. He also asked to take the media on board and launching an awareness campaign.

“You should not attempt to treat Coronavirus infection on your own. Stay at your home, do things only after consulting a doctor. Call them up, ask them, tell them your ailments. We will have to note that no vaccine has been developed for it so far, anywhere in the world,” Prime Minister Modi said while interacting with people of his Lok Sabha constituency Varanasi via video conferencing. “Scientists in India and across the world are working on it, work is going on rapidly. If someone recommends you a medicine then kindly talk to your doctor first. Take medicine only after consulting a doctor,” he added.

“In the last 24 hours, there have been 5 new COVID-19 cases in Delhi. One of them has a foreign travel history. Now, the total number of cases rises to 35 in Delhi,” CM Kejriwal said while addressing a digital press conference. Earlier today, CM Kejriwal assured people that the supply of essential commodities will not be hampered at any cost and added that personnel manning shops and engaged in other essential services would be issued E-passes promptly to facilitate their movement in the national capital during the 21-day lockdown period.

18:24 IST: COVID-19 : 26-year-old tested positive in Uttarakhand
A 26-year-old resident of Dugadda in Pauri has been confirmed positive for coronavirus, said Chief Medical Superintendent of Pauri on Wednesday.

“The 26-year-old youth who is confirmed positive for coronavirus is resident of Dugadda in Pauri of Garhwal district. He had returned from Spain on March 19,” said the Chief Medical Superintendent. The official also said that he was admitted to a hospital after he complained of cough.

16:29 IST: Free meals, increased rations in various states for poor, homeless
To mitigate the hardships faced by people, especially the homeless and poor, various state governments have announced increased rations and free meals.
On Saturday chief minister Arvind Kejriwal had announced that free cooked food will be provided twice a day to the homeless in night shelters and said his government will provide free ration to over 72 lakh people and the quantity will be increased from 5 Kg to 7Kg for every ration card-holders. On Wednesday, free meals were handed out at a ‘Rain Basera’ (shelter home), situated at Baba Kharak Singh Marg. Food was also distributed at a shelter home, near Bangla Sahib Gurudwara.

“Samples of three others in Pune are now tested negative for the first time and their samples have been sent for second testing again, the reports of which are expected by Wednesday evening. If those reports come negative again they shall be discharged with due process,” Dr Hunkare said.

14:49 IST: YSRCP MP Balashowry contributes Rs 4 cr fund from MPLAD to combat COVID-19
YSRCP MP from Machilipatnam V Balashowry has announced a contribution of Rs 4 crores to the Chief Minister’s Relief Fund for combating the COVID-19 outbreak.
In a letter addressed to Andhra Pradesh Chief Minister Jagan Mohan Reddy, Balashowry said, “I seriously thought, as a Member of Parliament what is that I could do to strengthen your hands in these difficult times to deal with COVID-19 and came out with an idea and decided to contribute Rs 4 crores to CM Relief Fund from my MPLADS Fund, so that you can optimally utilize it to deal with Coronavirus.” “I also feel that this gesture will send a good message to the people that we are also trying our best and contributing our mite in controlling and containing this deadly virus. I wish, if each of the 28 MPs contribute Rs. 4 crores each from their MPLADS Fund, it comes to Rs 112 crores,” the letter further read.

14:31 IST: COVID-19: UP govt announces Rs 50 cr more for state health department
Uttar Pradesh government has announced an additional fund of Rs 50 crore for the health department in wake of COVID-19.
On Tuesday, Uttar Pradesh Governor Anandiben Patel gave her nod for the declaration of coronavirus outbreak as a ‘disaster’ in the state. The state revenue department had declared COVID-19 crisis as a disaster.
Thirty-seven people have tested positive for COVID-19 in Uttar Pradesh, the Ministry of Health and Family Welfare reported on Tuesday.

The OMC added that this sum is in addition to the Rs 100 crore already contributed by the public sector company to the CMRF in February, 2020. “Odisha Mining Corporation (OMC) as a responsible public sector company, is contributing Rs 500 crores to Chief Minister Relief Fund (CMRF) for supporting the State government efforts to control the COVID-19 situation. This is apart from the Rs 100 crores already contributed to CMRF in February 2020,” a release by the PSU read.

12:51 IST: Pak’s coronavirus tally surges to 1000
The number of confirmed coronavirus cases in Pakistan reached 1000 on Wednesday, including 413 in the southeastern province of Sindh alone, while 7 people, including a doctor, have died of the infection, Pakistan Government said.

12:16 IST: 539 confirmed cases of COVID-19 in India, says ICMR
The Indian Council of Medical Research (ICMR) on Wednesday confirmed 539 positive cases of coronavirus in India.
“A total of 539 individuals have been confirmed positive among suspected cases and contacts of known positive cases,” said the ICMR in a statement.

11:38 IST: With 3 new cases, Gujarat’s COVID-19 count climbs to 38
With three fresh cases of novel coronavirus, the total number of people affected by COVID-19 in Gujarat has now risen to 38, according to state Principal Secretary (Health) Jayanti Ravi.

“Three new coronavirus positive cases have been reported in Gujarat. 38 positive cases reported till date,’ said Ravi here on Wednesday in a press conference. She informed that FIRs against 147 people have been filed for breaking home quarantine. “FIRs have been registered against 147 people for breaking home quarantine,” she said. On Tuesday, 52 samples to be tested for coronavirus were collected in the state.

11:13 IST: Goa to set up its own virology lab at GMC: State Health Minister
Goa is setting up its own virology lab at Goa Medical College (GMC), Vishwajit Rane, state health minister of Goa, said on Tuesday. “I am happy to announce the setting up of a virology lab at GMC, which has been possible with the help of the Central Government. We have procured the PCR machine through the Malaria Control Center” he said. At a time when COVID-19 positive cases are climbing in the country, the proposed virology lab will introduce real-time COVID-19 testing. Rane said, “Real-time testing for COVID 19 will be introduced in a couple of days using the PCR technology.”

This includes 512 active cases, while 40 infected people have already been cured or discharged. The Union Health Ministry said that total deaths due to the disease now stand at 9, as the second death reported in Delhi is COVID-19 negative. One patient has also migrated due to the infection.

The Central government has taken several steps to contain the rapid spread of the virus including the screening 15,24,266 passengers at the airports. Prime Minister Narendra Modi had on Tuesday announced a 21-day lockdown in the entire country effective from midnight to deal with the spread of coronavirus, saying that “social distancing” is the only option to deal with the disease, which spreads rapidly.

In a televised address to the nation, Prime Minister Modi said that it is vital to break the chain of the disease and experts have said that at least 21 days are needed for it.
The Prime Minister, who had also addressed the nation last week, said the lockdown has drawn a “Lakshman Rekha” in every home and people should stay indoors for their own protection and for that of their families.

ChiniMandi - Saturday, 31 July 2021
For the first time, Agri Exporters from the remote districts of India were connected to international buyers from USA, UAE, Japan through a virtual outreach event organised by the Directorate General of Foreign Trade (DGFT) under the Department of Commerce in partnership with the Agricultural and Processed Food Products Export Development Authority (APEDA).