Domestic Market:
Overview: According to the latest reports by Indian Sugar Mills Association (ISMA) the country has produced 303.60 LMT of sugar and about 57 lac tons of contracts for export of sugar have already been entered into so far which translates to 95% of the total MAEQ quantity for sugar season 2020-21.

The domestic market has been witnessing “no demand” with the surge in Covid-19 cases and statewise imposed lockdowns in different parts of the country. The Central Government however has been reluctant to call for a nationwide lockdown on apprehension of backlash on the economic growth. Sugar millers have already been facing the heat with selling pressure, stocks piled, unlifted sold stocks,growing interests etc, logistics has also taken a backseat hence not being able to liquidate funds. 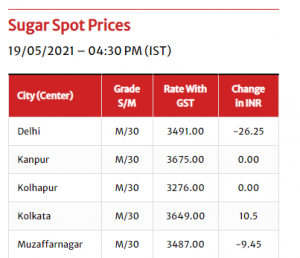 International Market:
On Tuesday sugar prices closed lower after the tumble in crude prices that slipped more than -3%.
Generally, a weakness in crude oil prices undercuts ethanol prices and exhibits bearishness for sugar.
London white sugar closed at $453.50/ton down $4.20 whereas New York closed 0.26 points lower to close at 16.95/lb in comparison to the previous day.

The first estimate of 2021/22 sugarcane harvest, released on 18th May 2021 by the National Supply Company (Conab), indicates that Brazil may produce 628.1 million tons, a volume 4% lower in comparison to 2020/21. The drop is explained by the 3% reduction in the harvest area in the Southeast, the main producing region in the country, with 5.2 million hectares, and a 6.2% decrease in production, estimated at 402.2 million tons. The Midwest also decreased the area for cultivation by 0.8%, reaching 1.8 million hectares for a total of 137.5 million tons of sugarcane, 1.6% less than that obtained in the previous harvest. In the Northeast region, even with 0.5% less area, there is an estimated growth of 3.2% in average productivity, which should result in 49.7 million tons, 2.7% higher than in the last harvest. The South followed the trend, with a reduction of 2.1% in the area, but a 2.5% growth in production, estimated at 35.1 million tons. The North, on the other hand, should maintain the area and increase the crop harvest by 3.3%, with 3.6 million tons.

On the ethanol front, exports grew by 55.1% in the 2020/21 harvest, which ended in March, when compared to the previous cycle, despite the reduction in national ethanol production in the period. The increase was favored both by the exchange rate and by the reduction in domestic demand. In this 2021/22 cycle, the outlook is for the exchange rate to remain at a high level, but the growth in domestic demand should limit the availability of ethanol for export. The harvest also starts with an optimistic outlook regarding the recovery of demand for Brazilian ethanol, which was affected in the previous cycle due to the pandemic. Growth in oil demand is also expected in the second half of 2021, with greater control of the pandemic.