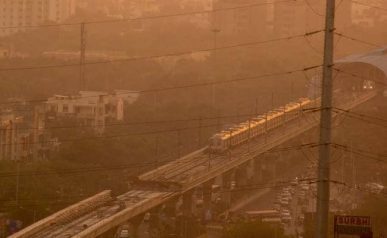 NEW DELHI: The air quality in Delhi deteriorated on Saturday with drop in wind speed, and the authorities predicted further fall in the air quality index of the national capital in the coming days.
The overall air quality index (AQI) recorded at 4 pm on Saturday stood at 300 which falls in the poor category and is just one point from being ‘very poor’, according to Centre-run System of Air Quality and Weather Forecasting and Research (SAFAR).

On Friday the AQI of the national capital stood at 154.

The PM10 level (presence of particles with diameter less than 10 micrometres) in Delhi stood at 243 and the PM2.5 level was recorded at 122, according to the data.

Authorities have predicted further deterioration of air quality in the coming days. The PM2.5 level was forecast to reach very poor level by Sunday .

A slew of measures are being taken by the CPCB to fight pollution during the upcoming winter season, when the air quality in Delhi is generally the worst.

Meanwhile, recent satellite images from the NASA have showed that the farmers in Punjab and Haryana have started burning crop residue earlier this month.

The NASA, on its official website, stated that burning crop residue in Punjab and Haryana has increased significantly over the past 10 days in and near Amritsar, Ambala, Karnal, Sirsa and Hisar.