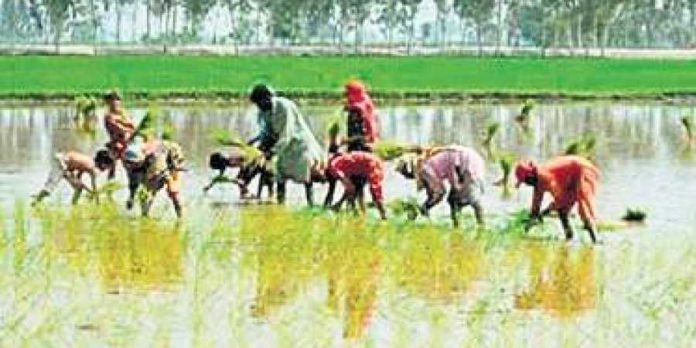 NEW DELHI: With one-third of agriculture activities in India still depending on groundwater for irrigation, the country’s cultivated land is shrinking due to depleting ground water levels and extreme weather conditions. This will impact the agriculture output and may upset the Centre’s target of doubling farmers’ income by 2022.

“Depleting water levels are one of the major concerns for agriculture. In areas that are mainly dependent on groundwater for irrigation, we have seen a continuous decline in farm lands that were being cultivated. This, if ignored, can be problematic,” said a NITI Aayog official. NITI Aayog is conducting a study on the shrinking agriculture land and water usage in agriculture sector.

According to the government data, in 2017, nearly 40 lakh hectares of agricultural land was impacted because of water woes, resulting in a drop in the area under cultivation for crops such as rice, pulses and oilseeds. The total area sowed with rice, pulses, oilseeds and cereals alone shrunk by 29 lakh hectares the same year.

In fact, the irrigation department issued an advisory to farmers in Baramullah, Kupwara, Bandipora and Ganderbal, requesting them not to go for paddy cultivation this year as due to lack of snowfall and rainfall, there is hardly any water in the Jhelum river and the streams.

However, it is not just water scarcity, but also mismanagement of water that is to be blamed as India uses two to four times more water to produce a unit of major food crop than China and Brazil.The Economic Survey has already warned of the impact of the climate change and had said that it could shrink agricultural income by as much as 25 per cent in unirrigated farmlands and 18 per cent in irrigated areas in next 82 years.

“India needs to take a giant step in making its agriculture sector more water-efficient than it is today. The effort is to conserve water in agriculture sector as the sector consumes a huge amount of water,” said Rajiv Kumar, vice-president, NITI Aayog.

About 33.12% farmers use groundwater for irrigation, according to Agriculture Census 2010-11

In 2017, nearly 4 million hectares of agricultural land faced water woes, resulting in a drop in area under cultivation for crops such as rice, pulses and oilseeds

In Andhra Pradesh, Rabi acreage shrunk by 7 lakh hectares in 2017. Even during 2016 Kharif, more than 2.5 lakh hectares remained uncultivated.

An IMF study says that for emerging market economies, a 1°C increase in temperature would reduce agricultural growth by 1.7%, and a 100 mm reduction in rain would reduce growth by 0.35%.

The water crisis caused average total loss worth 43,046 for cotton, 42,887 for sugarcane and 28,721 for groundnut during July-December 2012, according to the latest Eco Survey