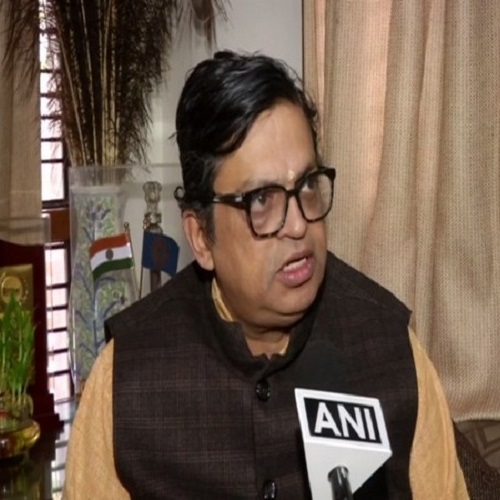 New Delhi [India], January 28 (ANI): The rate of growth of India’s GDP has slowed down but still the country is amongst the fastest growing economies in the world, BJP leader Gopal Krishna Agarwal said.

In an interview with ANI, Agarwal, who is BJP spokesperson for economic affairs, said that the government through Union Budget 2020 plans to boost consumer demand, particularly in agriculture and rural segments. “The government will continue its spending on infrastructure and allocate more funds to its social benefit schemes. The government will also push liquidity into rural and agriculture economy and help much more credit line to NBFC and MSME,” he said.

Agarwal, an economist, hoped that the government can give a roadmap for fiscal consolidation in the budget, and along with inflation targeting growth, there should also be a major consideration for the monetary policy committee.

“The government also has to tackle twin risk averseness both from the lenders as well as the borrowers’ side,” he said.

Ahead of the Budget, the BJP has conducted 10 sectoral and one macro and micro economy stakeholders’ dialogue, categorising them into three broadheads — firstly, sunrise sectors for India, secondly, the potential for higher employment generation and thirdly, the category of macro and micro-economy.

“We had invited and connected with about 250 associations, 15/20 organisations in each sector. All these associations have good ground connect and have given very good suggestions. We have prepared reports of all the important issues and suggestions thereof and have sent it to the government,” Agarwal said.

“Surely, the government will act on these suggestions. These suggestions have been categorised into immediate budgetary issues and having long term policy implications,” he added.
Asked about Prime Minister Narendra Modi’s ambitious target of expanding India’s economy from nearly USD 3 trillion (Rs 205 lakh crore) to USD 5 trillion by 2024, he said the roadmap was ready.

“The Modi government has announced an investment plan of 105 lakh crore under the National Infrastructure Pipeline (NIP). In our second term, within the first six months, the Finance Minister has announced 32 new initiatives of the government to boost the economy like reduction in corporate tax,” he said.

The BJP leader also said that the government is also planning to come out with a growth-oriented budget.

“All the macroeconomic parameters like inflation, deficit, foreign exchange reserves are a healthy terrain. Supply-side credit bottlenecks have been rectified and government plans to boost consumer demand, particularly in the agriculture and rural segments, ” he said.

Asked how is it possible to meet a target of USD 5 trillion dollar economy in the wake of the present situation of the GDP growth, he claimed that the GDP growth rate has been bottomed out.

“We will surely see the revival of growth in the coming period. The impact of mega reform such as GST, IBC and other anti-corruption measures will bring a transparent business ecosystem. The government’s focus on Ease of Doing Business is also giving desired results, ” he said.

On the issue of unemployment, Agarwal defended the government and claimed that sectors like real estate, automobiles, agriculture and manufacturing, particularly MSME has a large potential to generate employment and are the focus area for government support.

“Stand up and startup ecosystem and schemes like Atal Innovation mission are helping entrepreneurship and self-employment. Mudra loan is also making a big difference for small businesses. The automobile sector’s demand regarding the electric vehicle and emission norms have been duly met,” he said.

On the slowdown in the Indian economy, he said the rate of growth of India’s GDP has slowed down, but India is one of the fastest-growing economies in the world.

“India is affected by global growth slowdown and not because of what the IMF is saying. It’s the protectionist policies followed by countries like the United States and Europe with regard to manufacturing and agriculture. Significant are US-China trade war, US-Iran conflict and lopsided FTAs signed during the UPA regime,” he said.

“We have doubts about IMF projections, whether they have taken into consideration the impact of the Modi government’s various initiatives. GDP growth rate has bottomed out and we will see significant growth ahead,” he added.

The BJP leader also hit out at Congress for being critical of the government on the issues of economy.

“If opposition leaders including Rahul Gandhi want to discuss the economy, they are welcome. But first, he should answer about UPA’s failure on every front — corruption, inflation, NPA, FDI and FTA, and take responsibility,” he said.

Agarwal also said the business ecosystem requires a “transparent, corruption-free, equal opportunity environment, which our government is putting in place”.
Our far-reaching economic reforms like GST, IBC, Benani properties Act and Rs 105 lakh crore NIP will surely take India to USD 5 trillion dollar economy, which is inclusive development (antyodaya) for all,” he said.

On inflation, he said that the government has worked out the solution to rising onion prices by importing the vegetable from Turkey. “Now the fruits and vegetable prices have primarily settled down. It is a temporary phase due to supply-side constraints because they are perishable in nature,” he said.