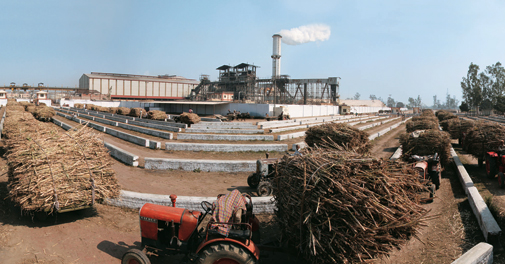 The central government is already drowning in the excessive productions of sugar, it has allowed sugar mills allowed sugar mills to export up to 2 million tonnes of sugar till September 2018 under the Duty-Free Import Authorisation (DFIA) and Minimum Indicative Export Quota (MIEQ) in order to flush some sugar out of the country. Yet not many mills in Uttar Pradesh, the country’s largest sugar producing state, are stimulated about it. Coping with low domestic sugar prices and building cane arrears, the millers are waiting for clearer signals from the central government regarding some incentive for export.

A miller explained that World prices are already depressed because of a glut and a freight onboard (FOB) price of around $350/tonne at best may be offered for Indian sugar. Deducting the transportation cost and fobbing charges for such exports of around Rs 2,000-2,500 per tonne of sugar, the net price of sugar at the mill gate under current circumstances from such exports would work out to Rs 19,500 per tonne. As compared to current ex-mill prices of Rs 28,500 per tonne in Maharashtra, from where most of the sugar would be exported, there is clearly a net loss of around Rs 9,000 per tonne. As Uttar Pradesh is a land locked state, an additional transportation cost would be incurred to reach the sugar to the ports. And if the finance cost and margins of the exporters/traders are added, this loss would be higher.

“One sees a lot of uncertainties about the future market conditions and scenario. The only certain part seems to be that the exporter or the concerned sugar mill will have to incur about Rs 100 to 115 crore losses on exports of 1 lac tons, which will be blocked for a couple of years, with a prayer on the lips and a hope in their heart that the sugar production in India in 2019-20, falls massively by 30 to 40% i.e. by 100 lakh tonnes, to allow sugar prices at the mill gate to touch Rs 40 per kilo. The moot question is, are we ready to take such a huge risk?” asked a sugar exporter.

Millers in Uttar Pradesh, which accounts for nearly 45% of the country’s sugar, are praying that the Government announce subsidies to sugarcane farmers as part of the cane price, like the government did in 2015-16 sugar season. The sugar mills in the state have been asking the government to announce subsidies of around Rs 7 to 10 per quintal of sugarcane, would give them enough strength to clear cane price arrears of farmers and also bear some losses on the MIEQ exports. “The sooner this is announced, it would be better as it would help us clear the cane price arrears of the farmers,” the miller said.