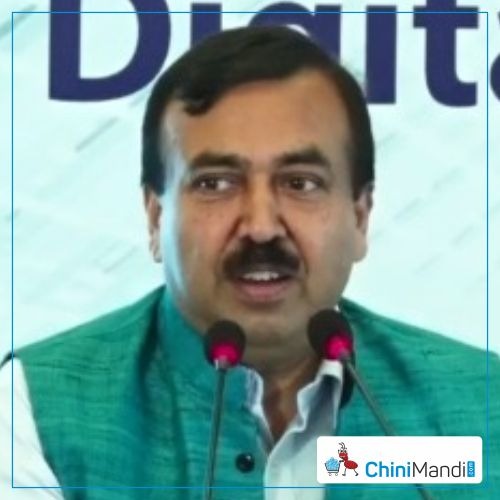 Secretary, Department of Food and Public Distribution, Shri Sudhanshu Pandey today briefed the media persons about ethanol blending with petrol (EBP) program. The roadmap for ethanol blending in India 2020-25 has been released by the Prime Minister Shri Narendra Modi on 5th June, 2021 i.e. on World Environment day. Notification regarding making E 20 fuel available by April, 2023 has been issued. It may be noted that BIS specifications for E12 & E15 blending have also been notified on 2nd June, 2021. Pilot project of E 100 dispensing from 3 locations at Pune was also launched by the Prime Minister.

Secretary, DFPD said that as a result of various measures taken to address demand and supply side issues, it is likely that ethanol distillation capacities in the country would be more than doubled by 2025 and we would be able to achieve 20 % blending target. Shri Pandey said that EBP will bring positive impact on country’s economy too. He said that it would promote ethanol as a fuel which is indigenous, non-polluting and virtually inexhaustible and would improve the environment and the eco-system as use of E20 fuel reduces carbon monoxide emission by 30-50% and hydrocarbon by 20%. To achieve blending targets, Government is encouraging sugar mills and distilleries to enhance their distillation capacities for which Government is facilitating them to avail loans from banks for which interest subvention up to 6% is being borne by Government.

He said that the production of fuel grade ethanol and its supply to OMCs has increased by 5 times from 2013-14 to 2018-19. In ESY 2018-19, we touched a historically high figure of about 189 crore litres thereby achieving 5% blending. It is expected that in current ethanol supply year 2020-21, more than 300 crore litrs ethanol is likely to be supplied to OMCs to achieve 8 to 8.5 % blending levels. It is also likely that we would be achieving 10% blending target by 2022.

He further informed that due to upcoming investment of about Rs 41,000 Crore in capacity addition / new distilleries, various new employment opportunities will be created in rural areas and strengthen the agricultural economy. Shri Pandey said this would save foreign exchange of more than Rs 30,000 Cr on account of crude oil import bill and would reduce dependence on imported fossil fuel thereby would help in achieving the goal of Atmanirbhar Bharat in petroleum sector.

Shri Pandey said in the next sugar season 2021-22, about 35 LMT of sugar is estimated to be diverted & by 2025 about 60 LMT of sugar is targeted to be diverted to ethanol, which would solve the problem of excess sugarcane/ sugar and would also help sugar mills in clearing cane price dues of farmers. Shri Pandey said that in past 3 sugar seasons about Rs. 22,000 crore revenue was generated by sugar mills/ distilleries from sale of ethanol to OMCs.

Shri Pandey said that about 5 crore sugarcane farmers & their families and 5 lakh workers associated with sugar mills & other ancillary activities would be benefitted with this intervention. Sugarcane farmers will get timely payment of sugarcane dues as the realization from sale of ethanol is much faster than sale of sugar.

It may be noted that India is facing a situation of plenty with surplus sugar, leading to liquidity problem to sugar mills and delayed payments of cane dues. The Government is encouraging sugar mills to divert excess sugarcane to ethanol which is blended with petrol.

Government has fixed remunerative price of ethanol from maize & FCI rice. To produce ethanol/alcohol from food grains, more than 165 LMT of additional food grains would be utilized; this extra consumption of surplus food grains would ultimately benefit the farmers as they will get better price for their produce and assured buyers and thus, will also increase the income of crores of farmers across the country.

Briefing about hand sanitizers, he said that prior to Covid-19, the annual production of hand sanitizer was about 10 lakh litre per annum and was mainly used in the hospitals. Keeping in view the crucial role of sanitizer in the fight against COVID-19, DFPD coordinated with Industry and State Governments to encourage industry to produce sanitizers.

With the collective efforts of DFPD & State Governments, more than 900 distilleries/independent units were accorded permissions to produce hand sanitizer. Installed capacity for production of hand sanitizer increased substantially to 30 lakh litre per day.