The Cabinet Committee on Economic Affairs chaired by Prime Minister, Shri Narendra Modi, has given its approval for fixing higher ethanol price derived from different sugarcane based raw materials under the EBP Programme for the forthcoming sugar season 2020-21 during ESY 2020-21 from 1st December 2020 to 30th November 2021. 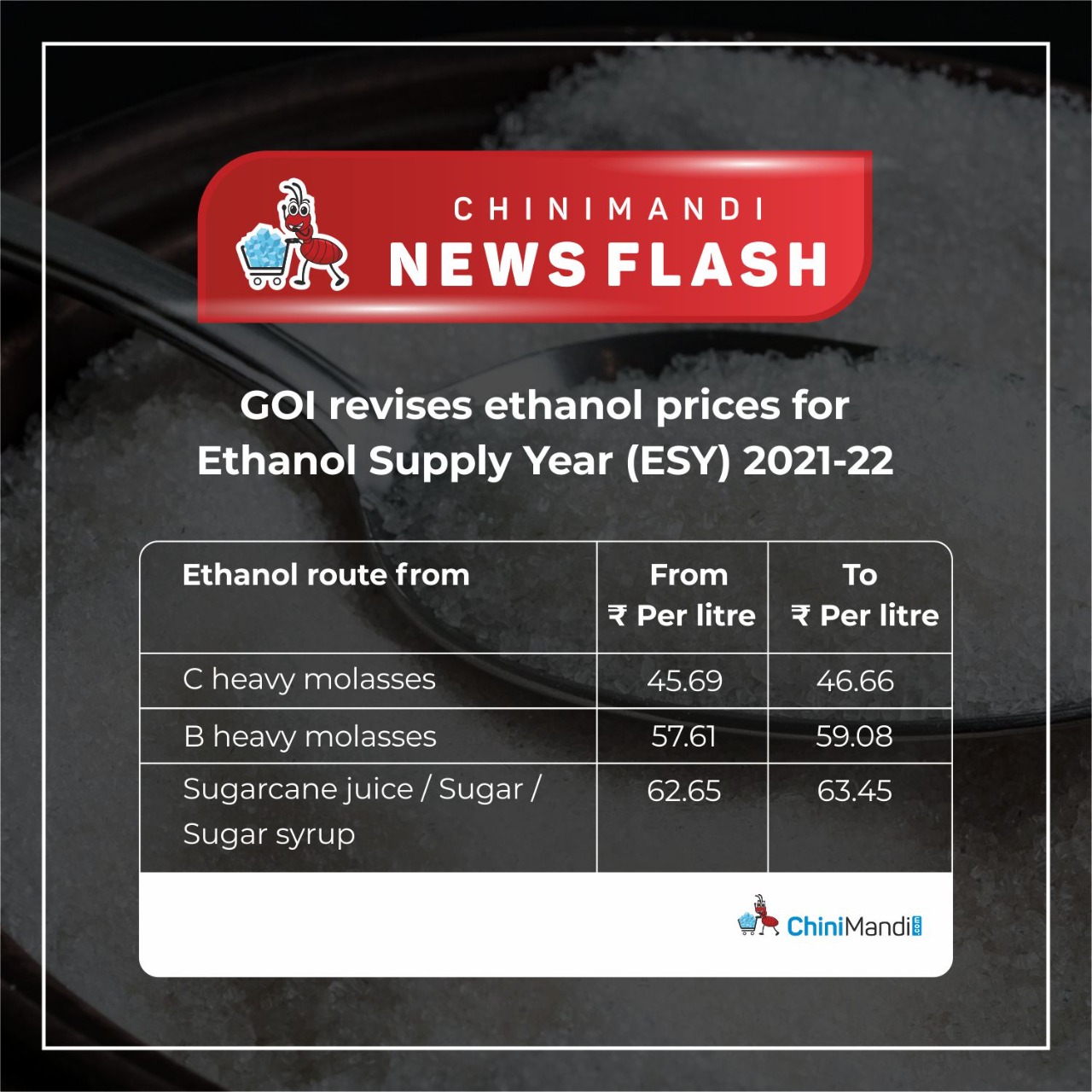 The approval will not only facilitate the continued policy of the Government in providing price stability and remunerative prices for ethanol suppliers, but will also help in reducing the pending arrears of Cane farmers, dependency on crude oil imports and will also help in savings in foreign exchange and bring benefits to the environment.

The decision to allow Oil PSEs to decide the price of 2G ethanol would facilitate setting up advanced biofuel refineries in the country.

All distilleries will be able to take benefit of the scheme and large number of them are expected to supply ethanol for the EBP Programme.

Government has been implementing Ethanol Blended Petrol (EBP) Programme wherein Oil Marketing Companies (OMCs) sell petrol blended with ethanol up to 10%. This programme has been extended to whole of India except Union Territories of Andaman Nicobar and Lakshadweep islands with effect from 1st April, 2019 to promote the use of alternative and environment friendly fuels. This intervention also seeks to reduce import dependence for energy requirements and give boost to agriculture sector.

Government has notified administered price of ethanol since 2014. For the first time during 2018, differential price of ethanol based on raw material utilized for ethanol production was announced by the Government. These decisions have significantly improved the supply of ethanol thereby ethanol procurement by Public Sector OMCs has increased from 38 crore litre in Ethanol Supply Year (ESY) 2013-14 to contracted over 350 crore litre in ongoing ESY 2020-21.

With a view to provide long term perspective to the stake holders, MoP&NG has published “Ethanol Procurement Policy on a long-term basis under EBP Programme.” In line with this, OMCs have already completed the one-time registration of ethanol suppliers. OMCs have also published the name so f eligible project proponents with whom long term agreements would be entered into for setting up ethanol plants in ethanol deficit states. Other prominent feature to provide long term perspective and attract investment includes directing OMCs to target 10% ethanol blending in petrol by the end of ensuing ESY 2021-22 and 20% by ESY 2025-26. As a step in this direction, Hon’ble Prime Minister has released the Report of Expert Committee on “Roadmap for ethanol blending in India 2020-25” on World Environment Day – 5th of June, 2021. All these would facilitate ease of doing business and achieve the objectives of Atmanirbhar Bharat initiatives.

Consistent surplus of sugar production is depressing sugar price. Consequently, sugarcane farmer’s dues have increased due to lower capability of sugar industry to pay the farmers. Government has taken many decisions for reduction of cane farmer’s dues. With a view to limit sugar production in the Country and to increase domestic production of ethanol, Government has taken multiple steps including, allowing diversion of B heavy molasses, sugarcane juice, sugar and sugar syrup for ethanol production. Now, as the Fair and Remunerative Price (FRP) of sugarcane and ex-mill price of sugar have undergone changes, there is a need to revise the ex-mill price of ethanol derived from different sugarcane based raw materials.

Further, to kick-start the Second Generation (2G) ethanol programme (which can be produced from agricultural and forestry residues, e.g. rice & wheat straw/corn cobs & Stover/bagasse, woody biomass), few projects are being set up by Oil PSEs taking financial assistance from the Government’s “Pradhan Mantri JI-VAN Yojana” approved by the CCEA in the past. These projects are likely to start commissioning from ensuing ESY 2021-22, thus a decision on 2G ethanol pricing is desired.