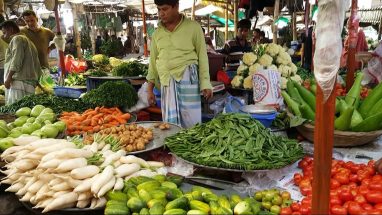 New Delhi, Jan 10 (PTI) In a major development, the government Thursday announced the commencement of inter-state trading through electronic National Agriculture Market (eNAM) and the first transaction was carried out between mandis of Uttar Pradesh and Uttarakhand.

So far, the trading on the eNAM was allowed either within the Agriculture Produce Marketing Committee (APMC) or between two APMCs located within the same state.

Presently, 585 regulated APMC mandis of 16 states and two union territories have been integrated to the e-NAM platform. The government has also decided to integrate additional 415 markets by March, 2020.

“With the start of new year 2019, the Prime Minister’s flagship program e-NAM has achieved another milestone by commencing inter-State trade between mandis of two different States,” an official statement said.

The very first inter-state transaction in tomatoes has been carried out between trader of Bareilly APMC of Uttar Pradesh and a farmer of Haldwani APMC of Uttarakhand, it said.

Similarly, the inter-state transactions in potatoes, brinjal and cauliflower have been carried out between the e-NAM mandis of Uttarakhand and Uttar Pradesh.

In all these cases, e-payments have been made via e-NAM portal. This will help farmers get better market access, more buyers/traders and realise better prices for their produce, the statement added.

On the eNAM portal, the government has given details about ‘logistic providers’ to traders from outside the state, which will facilitate transportation of commodities after trading.

A separate dashboard to promote inter-state trade has been developed on the e-NAM platform, that seeks to network the existing physical regulated wholesale mandis through a virtual platform to create a unified national market for agricultural commodities.

It also promotes prices commensurate with quality of produce besides single window services for all APMC related information and services.

Farmers can access the information on e-NAM easily through their mobile phones from anywhere. This online trading platform aims at reducing transaction costs, bridging information asymmetry and helps in expanding the market access for farmers.