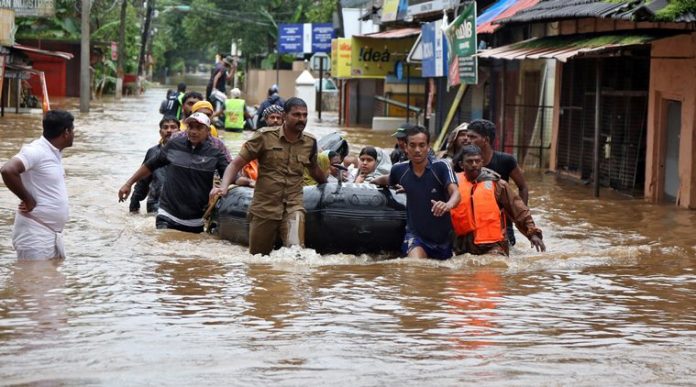 New Delhi, Aug 20 (PTI) The government has asked industrialists and business organisations to provide whatever help they feel is appropriate to flood-affected Kerala, which is facing a “humanitarian crisis”, Union minister Suresh Prabhu said today.
Prabhu, who holds the portfolios of Commerce and Industry as well as Civil Aviation, also said that domestic airlines have been persuaded to carry cargo free of cost to the state.
More than 200 people have died and over 7.24 lakh have been displaced following floods and landslips in Kerala, which has been ravaged by heavy rains in the last one week.
Making it clear that the Centre does not want to do “politics” with regard to providing rescue and relief to Kerala, Prabhu said it is only facilitating help.
“Govt has asked industrialists and business organisations… to help in whatever (way) they feel is appropriate,” Prabhu told PTI in an interview here.
On steps being taken to help Kerala, the minister said he has directed the DIPP Secretary to talk to all industrialists, business organisations like CII and FICCI, and all philanthropists on what they can give to the state.
“We are not collecting anything, we are only facilitating… What is the purpose of collecting and putting our stamp? We don’t want to do any politics over it,” he said.
The Department of Industrial Policy and Promotion (DIPP) comes under the Commerce and Industry Ministry.
Prabhu said efforts being made are purely for humanitarian help. “It is a humanitarian crisis… (which is) very sad and unfortunate,” he added.
Airlines have been persuaded to carry free cargo (to Kerala) but there should be a counter-party to receive it there, he added.
According to him, the Civil Aviation Ministry devised a strategy wherein key airlines were contacted in terms of helping Kerala deal with the flood situation.
To help the state, commercial flight operations started today from the naval airport in Kochi as the city’s main aerodrome is shut till August 26 due to floods.
“We are willing to do anything and everything possible to make Kerala come back on its own fleet,” Prabhu said.
The minister said he will be appealing to the NRI community as well whenever he travels abroad.
On August 18, Prime Minister Narendra Modi announced an immediate financial assistance of Rs 500 crore to the rain-battered Kerala, after reviewing the flood situation in the state.
Modi also announced an ex-gratia of Rs 2 lakh per person to the next of kin of the deceased and Rs 50,000 to those seriously injured from the Prime Minister’s National Relief Fund (PMNRF).