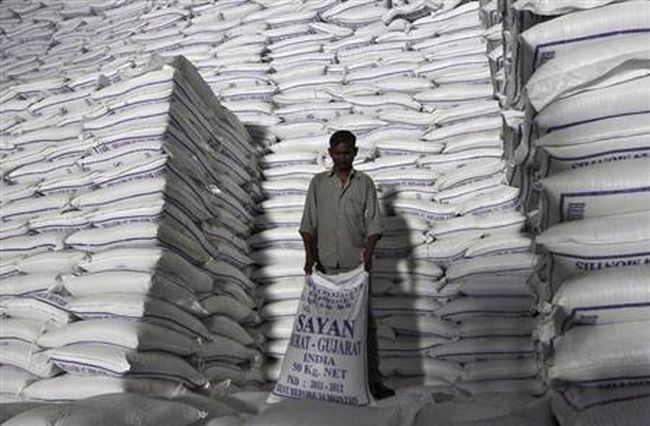 Norms for creating three million tonnes of sugar buffer stock have been notified by the Union Ministry of Consumers Affairs and Public Distribution.

According to the notification, instead of buying sugar from mills, the government will finance the cost of sugar and storage will be at mill-owned godowns, along with sugar pledged by mills with banks. It will also bear a finance cost of 12 per cent a year or actual interest charged by the banks, whichever is lower, along with insurance and storage charges at 1.5 per cent a year.

What has irked the mills is that the sugar price of Rs 29 per kg is the same as the minimum ex-factory price notified for mills. However, this price will be only for reimbursement of finance and insurance charges by the government to the mills. The reimbursed charges on buffer stock, which government has fixed for each mill, will have to be used by the latter to clear cane farmers’ dues. The government will charge the reimbursement expenses to the subsidy account. The Cabinet has cleared a provision of Rs 11.75 billion for one year towards three million tonnes of buffer stock.

Abinash Verma, Director General, Indian Sugar Mills Association said, “Buffer stock creation will temporarily withdraw three million tonnes from the market and reduce pressure on mills to sell immediately. That will improve market sentiments and check a fall in prices. However, since the all-India average cost of production is Rs 35-36 a kg, the cost of carrying the sugar should be reimbursed at cost, not Rs 29 per kg.”

According to the notification, the buffer stock will be for a period of one year, beginning July 1, 2018, and charges will be reimbursed to mills on a quarterly bases upon fulfilment of certain conditions.

However, another issue that comes up is the release mechanism for sugar mills. The mills are annoyed with the quota system. According to the industry official, the Cabinet has not spelt out details of stock limits but government officials brought back the release quota mechanism prevailing during the license raj prior to 2012.

Verma said, “The monthly sugar sale quota is a huge step backwards into the license Raj. The release given for June or the stock holding limit is based more on sugar stocks held on May 31 and less on production. So mills that did not sell so much last year and in the first six months of the current season have got more quotas.”

However, a government official said, on the condition of anonymity, “They have fixed the quota based on closing stock with mills as on May 31.”

According to him, the reason for this is that several private mills breached the quota the past few months despite there being stock limits and hence they will not be eligible for export subsidy either. However several co-operatives in Maharashtra that have seen a significant increase in production compared to a year ago have met the stock limits and any other method to calculate stock limits would have put Maharashtra and Karnataka sugar mills at a disadvantageous position.

Verma is sceptical about the success of reverse stock limits, though. He said, “Release mechanisms have failed to control prices. They will not encourage efficiencies and investments. Once a minimum price for sugar is fixed, the sale quotas have no role in controlling sugar prices.”