This month, some positive economic signs continued to emerge despite some tailwinds. Shipping prices and supply chain pressure are stabilising, retail sales and employment are holding steady. The main issue to keep an eye on this month is gas supply to Europe from Russia.

The world’s supply chain has been trapped in limbo since the beginning of the COVID-19 pandemic, exacerbated by factors such as high freight costs and bottlenecks, component shortages and the Russia-Ukraine war. Now, some fragile glimmers of hope are beginning to emerge.

Last month, we highlighted that container freight prices had dropped almost 27% from their all-time high of over USD 10,000 for a 40-foot equivalent unit. This month, Drewry’s index fell even further, with prices now down 32.5% below 2021 highs at USD 6,999 as of July 14.

Many of the world’s largest container ports are in China. Despite COVID-related lockdown restrictions, a report released by the Predictive Science Research Center at the Chinese Academy of Sciences last week expects these ports to register growth on 2021 levels.

Of the top five container ports, four are in China. The container throughput for Shanghai, Ningbo-Zhoushan, Shenzhen and Guangzhou for 2022 is expected to reach between 13.4 million 20-foot equivalent units (TEU) and 13.6 million TEU, about 2.1% to 3.2% above 2021.

But according to CNBC’s Supply Chain Heat Map, China is not where the problem lies. Instead, strikes at European ports has all but closed down operations in Germany and are tying up as many as 200,000 TEUs at Hamburg alone.

Rotterdam, one of the world’s biggest container ports, is also experiencing heavy congestion in terms of vessel schedules and trucks. 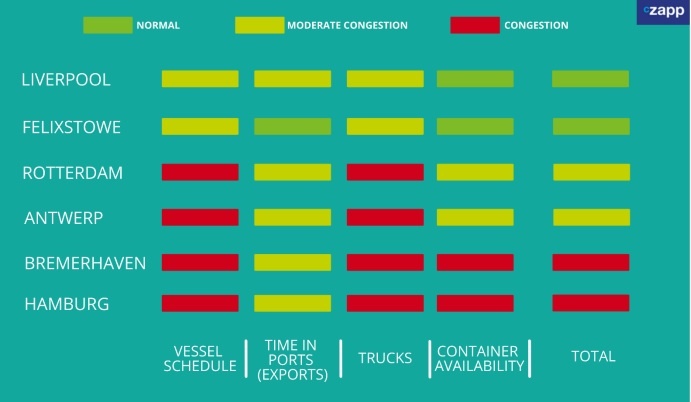 The impact of inflation on consumer spending continues to be a key metric needed by freight companies to gauge future demand. In the US, after a contraction in retail spending in May, there was a strong recovery in June to USD 680.6 billion.

In Europe though, retail sales volumes have stagnated. For most of 2022, retail sales have been flat as the cost of living has grown.

The Global Supply Chain Pressure Index – an indicator compiled by the New York Fed to measure supply chain congestion – fell again in June to 2.4 in June from 2.9 in May. The index peaked at 4.4 in December.

Within the index, factors such as global transportation costs and PMI indicators are brought together to take the temperature of global supply chains. And PMI itself has stabilised into growth territory since July 2020, although it continues to fall marginally.

June’s manufacturing PMI figure was down just slightly to 52.2 from 52.3 in May. The index still remained above the 50% baseline.

There is a delicate balance to be reached with employment numbers. On one hand, low staff availability could generate a rise in wages, which could fuel inflation. However, on the other hand, rising unemployment coupled with the slow growth being seen at the moment would create an environment of stagflation.

In the past few months, the number of strikes around the world has been pronounced as the cost of living rises and wages fail to grow at the same rate. It is likely that, without an increase in pay, these strikes and protests will continue and threaten to throttle supply chains.

Fertilizer prices have been gradually stabilising from highs of over USD 900 per tonne at the beginning of 2022. The price of urea is now at about USD 690 per tonne, down 25% from its April highs.

Farmers have so far been able to avoid the full pressure from the fertiliser price increase by using less fertilisers or turning to alternatives to combat price rises. However, this tactic is unlikely to be viable for the long term and is likely to compromise yields.

There has also been more positive sentiment around use of Russian fertilisers after the US government issued a written clarification on its sanctions and emphasised that Russia’s food and fertiliser exports are exempt.

Oil prices rose this month, with European crude reaching over USD 120 a barrel. However, in the first few weeks of July, there has been a slight weakening in prices, which have dipped below USD 120/barrel again.

There was optimism over a meeting between US President Joe Biden and Saudi Arabian crown prince Mohammed bin Salman, with speculation that the countries would agree to an increase in oil output. Despite the failure to secure a deal, the oil price remained steady.

Concerns over Russian sanctions have been largely offset by worries of a recession, which will destroy oil demand. According to the Energy Information Agency, US crude inventories dropped by 400,000 barrels last week, stoking supply concerns.

The ECB announced a 50-basis-point rate hike last week. The rise is higher than the expected 25 basis points and the bank’s first upward move since 2011. This has prompted speculation that the Fed could shock with a 1% rise later this month rather than the consensus of 0.75 percentage points. As of June, US inflation stood at 9.1%, while Eurozone inflation reached 8.6%.

The Governor of the Bank of England said last week that a hike will be on the table in August. The Monetary Policy Committee is expected to make at least one more increase by the end of the year. Some estimates peg rates in 2023 at 3.3%.

An increase in rates is a negative for company balance sheets. Supply chain firms that rely on credit lines and debt for their operations will be sure to feel the stretch.

So far this year, companies have had severe difficulty in even obtaining additional credit, and this will become harder as rates increase. High yield debt issuance has dropped to just over USD 20 billion this year so far. In 2021, high yield deals totalled over USD 100 billion. Several bond deals have been pulled as investors demand higher interest rates.

Between the end of May and the end of June, the amount of European debt trading as distressed more than doubled, prompting concerns over high levels of default in the future.

… And One More Indicator to Watch

All eyes have been on the maintenance of the Nord Stream 1 pipeline since it was brought offline for maintenance on July 11. The pipeline, carrying Russian gas directly to Germany, has the capacity to transport up to 55 billion cubic metres of natural gas – about 2% of Germany’s annual consumption.

Conflict between Germany and Russia has been simmering due to the Ukraine invasion after the EU imposed economic sanctions and refused to pay in Roubles as President Putin demanded. Some have feared that Russian gas company Gazprom will refuse to restart operations on the pipeline. The Kremlin-owned utility last week sent a letter to customers declaring force majeure retroactively from June 14.

However, Gazprom restored gas flow through the pipeline as scheduled, albeit at levels significantly below capacity. This comes amid positive sentiment on Ukraine as Putin sits down with Turkey and Iran to discuss lifting the Ukrainian grain blockade. 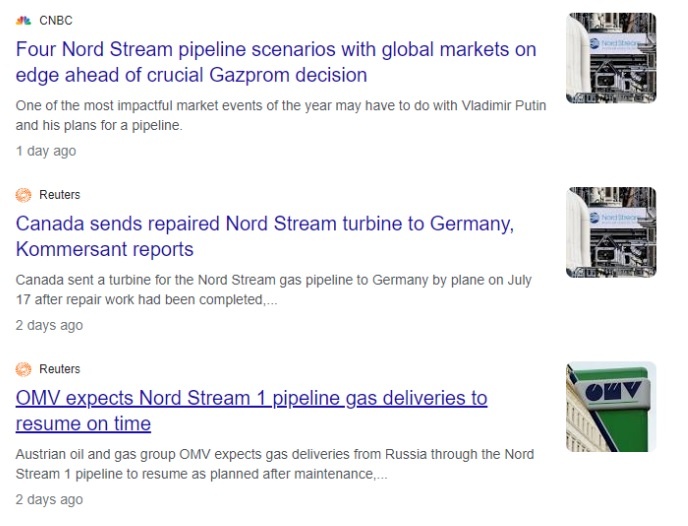