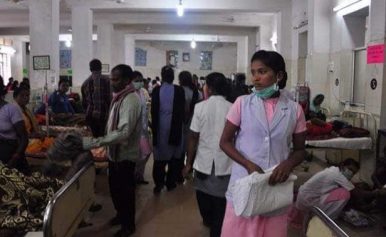 The Uttar Pradesh health ministry has ordered an audit of every death to identify the disease, and both central and state teams have been deployed in the six affected districts.

BAREILLY: A “mystery fever” has claimed 84 lives across six districts of Uttar Pradesh in the last six weeks, forcing the Yogi Adityanath government to sound a high alert. While Bareilly district in the west reported 24 casualties, the highest among affected areas, 23 succumbed to the ailment in adjoining Budaun district.

The Uttar Pradesh health ministry has ordered an audit of every death to identify the disease, and both central and state teams have been deployed in the affected districts. “Prima facie, it seems like these are cases of viral fever, typhoid and malaria. We are distributing medicines, organising camps and conducting mosquito-fogging drives. I am confident that we will be able to control this,” said Uttar Pradesh Director General of Health Services Padmakar Singh.

The Uttar Pradesh government confirmed reports of the outbreak in a press release. They identified the affected districts as Bareilly and Budaun in western Uttar Pradesh, followed by Hardoi, Sitapur, Bahraich and Shahjahanpur — which are close to state capital Lucknow.

Uttar Pradesh Health Minister Sidharth Nath Singh said people take their sick relatives to quacks first, and approach authorised health officials only after things have gone out of control. This, he asserted, was one of the main reasons for the high casualty rate.

“I appeal to everyone to take their relatives to govt hospitals, and not these quacks,” said Mr Singh.

A government spokesperson said an awareness drive will also be launched to counter the unnecessary alarm being caused by “misleading and incorrect” media reports.