Home All News Hike In MSP Could Give Relief To UP Farmers From Changing Their... 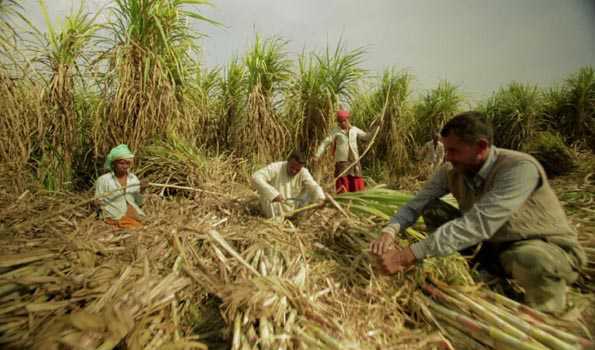 Deccan ChronicleThe beleaguered sugar industry in Uttar Pradesh reeling under the twin impact of the bumper sugar production and mounting arrears of the farmers has heaved a sigh of relief following the steep hike in minimum support price (MSP) for the Kharif crops by the Union government . The industry is confident that with the hike in the MSP for the Kharif crops the area under cultivation for sugarcane would substantially come down and settle at comfortable level to prevent glut of the sugarcane and sugar in next season commencing from November next.

The likely preference of the farmers for the non paddy Kharif crops has also given a boost to the chief minister Yogi Adityanath government’s agenda of promoting less water intensive crops. The government had already been taking steps to encourage farmers to cultivate coarse cereals, including maize, jowar, bajra (millets) and jau (barley) apart from paddy, which is highly water intensive crop. The MSP push would further this agenda.

Besides, the sugar industry is hoping that the MSP hike would divert some sugarcane area to other competing crops, so that cane acreage settles at a more comfortable level to pre-empt market glut that ultimately results in excess production, sugar price crash and arrears.

Total UP sugarcane acreage is estimated at over 2.22 million hectares (MH), an increase of about 20,000 hectares over last year even in the face of record outstanding and glut, since cane farming is considered more lucrative than other crops. Its area had been on a rising trajectory over the past almost 5 years.

According to data, aggregate area under coarse cereals is estimated at over 2 million hectares (MH) or 10 per cent of the total 20.5 MH of cultivated area in the state, which ranks among the top agricultural producers in India. Total production of maize, jowar, millets and barley during 2016-17 stood at 4.7 million tonnes (MT) or 9 per cent of total state food grain production of 55.7 MT.

In fact, the Adityanath government had already announced 50 per cent subsidy on high yielding seeds of barley, maize, jowar and millets. The state plans to double the distribution of high yield seeds from 5,500 tonnes to 11,100 tonnes during 2018-19. During 2016-17, the state had distributed 0.51 MT of the seed of all food grain varieties, including 0.11 MT of kharif and 0.4 MT of rabi varieties respectively.

The government has also engaged Kanpur-based CSA University of agriculture and technology to develop low water-intensive food grain varieties. The falling groundwater levels and depleting surface water resources have prompted the state government to take a multipronged approach to preserve water through crop diversification and economic use of water during irrigation.

UP was the first state in India to execute the Centre’s ‘per drop, more crop’ mission to economies on the use of water in farming by launching special ‘farmer water schools’ to make the farmers aware about the concept. About 160 such schools are being run in 19 districts by the agricultural department in association with the UN agency Food and Agriculture Organisation (FAO) .

Besides, the government is forming ‘water consumers’ body’ in the Bundelkhand region to handover the management of irrigation canals to farmers after training and orientation. This task had even earned the state plaudits from the funding agency World Bank.

The sugar industry faced with the glut of sugar and bumper cane crop during 2017-18 season, are reaching out to farmers urging them to stop sowing sugarcane for 2018-19 and bring down area under cane cultivation. To force the farmers from sowing sugarcane the sugar industry has also stopped investing in cane development where they provide cane seed, insecticide and other agriculture inputs on credit or at subsidised rates to cane growers.