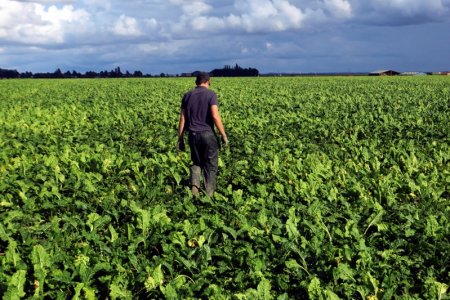 The EU’s executive had already projected a fall in sugar production in 2018/19 after heavy rain delayed spring planting, and a hot summer in top producing countries France, Germany, Poland and Britain could make the decline steeper.

But with around a month of the growing season left, sugar beet could recover if it gets more of the milder temperatures and rain that broke a heatwave last week, crop observers said.

In France, growers group CGB currently expects yields to be around the average of recent years.

Technical beet institute ITB cut its French sugar yield forecast last week to 13.6 tonnes per hectare (t/ha), down 0.3 t/ha from a month ago and versus 16 t/ha last year, stressing that non-irrigated crops had suffered from a hot, dry July.

The planted area in France is close to last year’s level at 484,000 hectares, according to the farm ministry.

The CGB was also expecting overall EU yields to fall back to the average of recent years, which could reduce the bloc’s sugar output by 1.5-2 million tonnes from just over 21 million in 2017/18, Masson added.

The likely drop could be welcome for EU producers caught out by a big global surplus and falling prices just after ramping up supply to profit from the ending of EU quotas a year ago.

“There won’t be the same need for Europe to seek export destinations and we’ll be able to focus on internal demand,” Masson said.

“At first, the beets seemed to cope with the heat better than other crops, but since July, they have also suffered considerably. Nevertheless it seems that damages from dryness will vary from region to region,” Lehner said.

The association has said it expects the crop area to be little changed from last year’s 385,000 hectares.

“There are areas where the size of beets is much lower than average, but there are also regions where they are characterized by both high weight and high sugar content.”

Polish farmers have planted about 235,000 hectares of beet this year, up slightly from 2017, and could start harvesting in late August.

British farms have also been hit by severe summer weather.

“As with most arable crops, sugar beet has been affected by the exceptionally dry and warm conditions this summer,” said Colm McKay, agriculture director at British Sugar, declining to give harvest forecasts