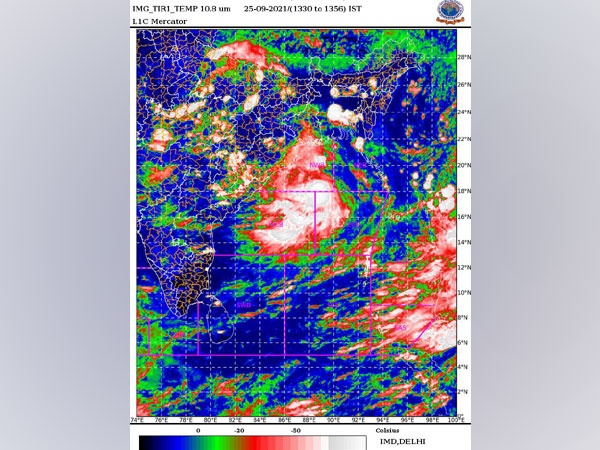 New Delhi [India], September 25 (ANI): The India Meteorological Department (IMD) on Saturday informed that the deep depression over the central Bay of Bengal has intensified and issued a cyclone alert for north Andhra Pradesh and adjoining south Odisha coasts.

IMD, in a tweet, said, “Cyclone Alert for north Andhra Pradesh and adjoining south Odisha coasts: DD is centred near 18.4°N/88.7°E.To cross north Andhra Pradesh – south Odisha coasts b/w Kalingapatnam and Gopalpur by the evening of September 26.”
The National Crisis Management Committee (NCMC) chaired a meeting under the Chairmanship of Cabinet Secretary Rajiv Gaubare and viewed the preparedness of Central ministries and agencies, state governments to deal with the situation arising out of a cyclonic storm developing in the Bay of Bengal.

In the meeting, the Director-General of IMD briefed that the cyclone is expected to cross the north Andhra Pradesh and South Odisha coasts by the evening of September 26, with wind speeds ranging from 75-85 km per hour, gusting to 95 km per hour, accompanied by heavy rainfall in the coastal districts of the states. It is likely to affect the districts of Srikakulam, Vizianagaram and Vishakhapatnam in Andhra Pradesh and Ganjam and Gajapati in Odisha.

Referring to the IMD, and the cyclone alert in these states, Satya Narayan Pradhan, Director General of the National Disaster Response Force (NDRF) informed that 13 teams (24 sub-teams) have been deployed in Odisha and five in Andhra Pradesh. All the teams will be deployed by Saturday night, he added.

The Cabinet Secretary assured the state governments that all Central agencies are ready and will be available for assistance with the aim to keep the loss of lives to near zero and minimize damage to property and infrastructure. (ANI)
To receive ChiniMandi updates on WhatsApp, please click on the link below.
WhatsApp Group Link