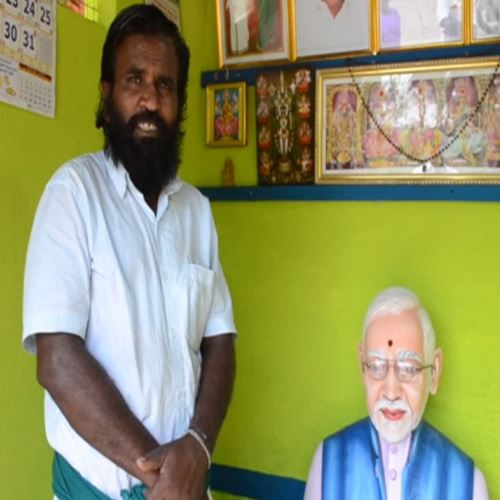 Trichy (Tamil Nadu) [India], Dec 27 (ANI): A farmer in Trichy has constructed a temple in honour of Prime Minister Narendra Modi.50-year-old P Shankar, who hails from Yerkudi village of Thuraiyur town, said that he was impressed with the welfare schemes started by his government that he decided to construct a temple as a mark of respect for PM Modi. “I did not have a toilet facility. Now, it has been provided to us. I am impressed by with all his welfare schemes reaching to the people in rural areas. Therefore, I decided to build a temple for him,” he said.

The farmer said he used his savings to build the temple and performs pooja everyday.

“I am a farmer who owns 10 acres of land. I bought this piece of land after I returned back from Saudi Arabia. I like Modi “Ayya” very much because of his visionary welfare schemes. Last year, there was a drought in the area. Then I opted for drip irrigation system as suggested in 5 acres of land. I earned from adopting drip irrigation,” he told ANI.

“We did bhoomi poojan of the temple eight months back. Gradually, I saved money from my earnings and thus carried out the work of temple construction. I spent Rs 1.25 lakh on this temple. I worship his bust daily,” Shankar said.