Home All News In Talks With Finance Ministry Over Credit Issues Of Exporters: Prabhu 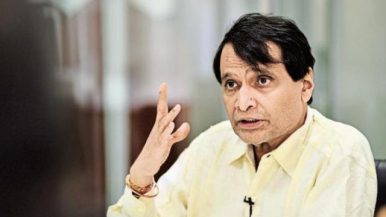 New Delhi, Nov 27 (PTI) Commerce and Industry Minister Suresh Prabhu Tuesday said he has taken up the issue of declining credit to exporters with the finance ministry to ensure adequate availability of funds to them.

Prabhu said exports are growing and the ministry is taking steps to further accelerate the growth rate.

“One of the main challenges for export is finance. There is a decline in (export) finance, so we have taken up the issue with the finance ministry…I think, the finance minister is also looking into this (as in) how we can improve the credit flow into the export sector,” the minister told reporters here.

Federation of Indian Export Organisations (FIEO) President Ganesh Gupta has time and again demanded augmentation of credit flow to the export sector, as a sharp decline in credit would impact exports growth.

The minister has earlier suggested that loans to exporters should be considered as priority sector lending by the banks.

He said logistics sector will play a key role in enhancing the competitiveness of Indian goods in the global markets.

The ministry along with FIEO is organising ‘Logix India’ from January 31 to February 2, 2019 here.

Speaking on this, Gupta said over 20 countries are sending their delegations to explore logistics partnerships with India in this function.

He said the organisation is focussing on logistics solutions for ‘difficult to reach markets’ and over 100 international delegates are expected to attend Logix India.