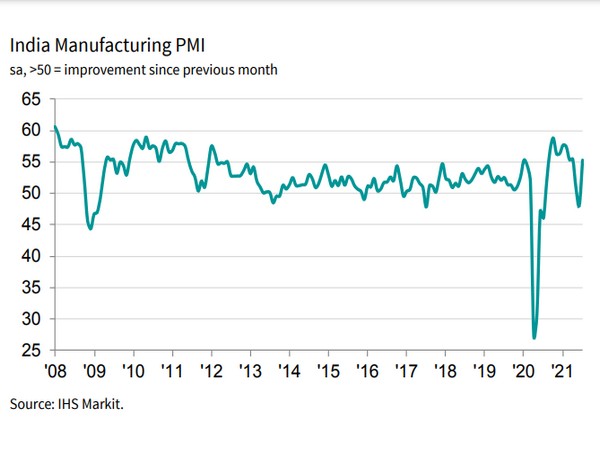 New Delhi [India], August 2 (ANI): Operating conditions in India improved during July after growth was halted by the escalation of the pandemic in June, according to the latest IHS Markit Manufacturing PMI released on Monday.

Output, new orders, exports, quantity of purchases and input stocks all returned to expansion territory while a marginal increase in employment ended a 15-month sequence of job shedding.
Meanwhile, there was softer but still sharp increase in input costs. Output charges rose only slightly, however, as several companies absorbed additional cost burdens amid efforts to boost sales.

After slipping into contraction for the first time in 11 months during June, the seasonally adjusted IHS Markit India Manufacturing Purchasing Managers’ Index (PMI) moved back above the critical 50 threshold in July.

The headline figure was up from 48.1 to 55.3, pointing to the strongest rate of growth in three months.

Factory orders rose amid reports of improved demand and the easing of some local Covid-19 restrictions. The upturn was sharp and compared with a marked decline in June.

Rising sales supported a recovery in output which increased in July after falling for the first time in 11 months during June. The rate of production growth was sharp and outpaced its long-run average.

In tandem with sales growth and rising production requirements, manufacturers hired extra workers in July. The increase in employment was mild, but ended a 15-month sequence of job shedding.

Companies also purchased additional inputs for use in the production process. The overall rate of buying activity growth was solid by historical standards.

In turn, goods producers saw an increase in their stocks of purchases during July. The accumulation was marked and followed a decline in June.

Indian firms foresee output growth in the year ahead, with the end of the pandemic and rising sales expected to support the upturn.

The overall level of positive sentiment rose from June’s 11-month low, but remained historically subdued as some companies were concerned about the path of the pandemic.

“Hence, we expect the Reserve Bank of India to keep interest rates unchanged in its August meeting as it continues to support growth.”

IHS Markit is a world leader in critical information, analytics and solutions for the major industries and markets that drive economies worldwide. The company delivers next-generation information, analytics and solutions to customers in business, finance and government. (ANI)
To receive ChiniMandi updates on WhatsApp, please click on the link below.
WhatsApp Group Link