Home All News India To Double Exports By 2025: Prabhu 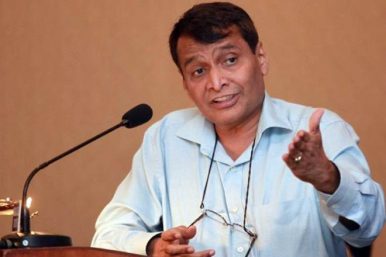 Issues related to exporters were discussed during a stakeholders’ meeting to discuss a strategy for revitalising India’s exports and doubling the exports by 2025.

“This is necessary in view of challenges like uncertainty of global trade, rigid approach of banks affecting availability of credit, high logistics cost and productivity standards and qualities,” an official statement quoting Prabhu said.

Minister of State for Commerce and Industry C R Chaudhary will be the chairperson of this mission and will review the work of different export promotion councils and divisions of the ministry.

Prabhu stated that a special strategy is being prepared for the services sector to achieve broad-based growth instead of the existing pre-dominance of IT-ITeS.

The ministry said that commodity and territory specific strategy is also being prepared for items like gems and jewellery, textiles, engineering, electronics, chemicals, pharma, agri and marine products.

The commerce minister said that apart from traditional markets, India must also look at boosting trade with smaller countries.

He also said that exporters should not miss the opportunity presented by China’s consumer market.