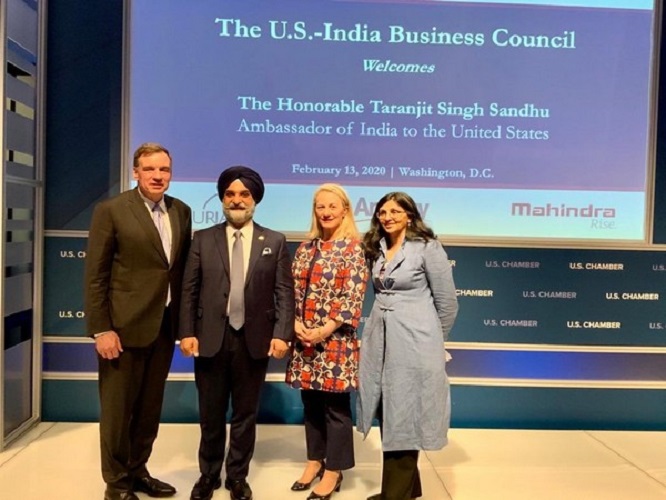 Washington DC [USA], Feb 14 (ANI): India and the United States are continuing to work towards finalising a trade agreement, senior US diplomat Alice G Wells said on Thursday (local time), ahead of President Donald Trump’s scheduled two-day visit to India later this month. Wells, who is the Acting Assistant Secretary of State for South and Central Asia, made the statement while speaking to reporters at a reception hosted by US India Business Council (USIBC) here in the honour of India’s new Ambassador to the US, Taranjit Singh Sandhu.

Tensions on the trade front between the two countries had emerged in June, last year, after Trump revoked preferential trade privileges, in response to which India imposed tariffs on 28 US products, including almonds and apples.

Despite several meetings held over the past 18 months in Washington DC, New Delhi, and New York, trade negotiators of the two countries are yet to finalise on a deal.

Wells further said that it would be a “big setback” with respect to the issue if even a “tiny Phase 1 trade deal” is not finalised upon during Trump’s scheduled visit to India.

Even though India is an important trading partner for the US over the past two decades, the relationship still stands marred by long-standing disagreements. Ambassador Wells told reporters that “US is concerned” about some of the (policy) directions the Union Budget was going in, specifically mentioning India’s e-commerce FDI rules that affect American companies.

Even though Defence, energy, medical devices and agriculture are among the confirmed items said to be on the table, experts say the constructs of the trade agreement, and whether it can even be called a ‘trade deal’, will be seen by the outcome of POTUS’s trip to India in less than two weeks.

In his address to a gathering of American business community present at the event, Sandhu said he considers himself fortunate to have arrived in the US as an Ambassador at a time of exciting possibilities.

“Within 10 days, we will witness the historic visit of the President of the United States to India. This visit will help to solidify our partnership, across all spheres,” the envoy said.
Wells described Sandhu as a seasoned veteran of Washington and a true friend of the US-India partnership.

Secretary of State Mike Pompeo and Wells will not be accompanying President Trump to India during the state visit beginning February 24.