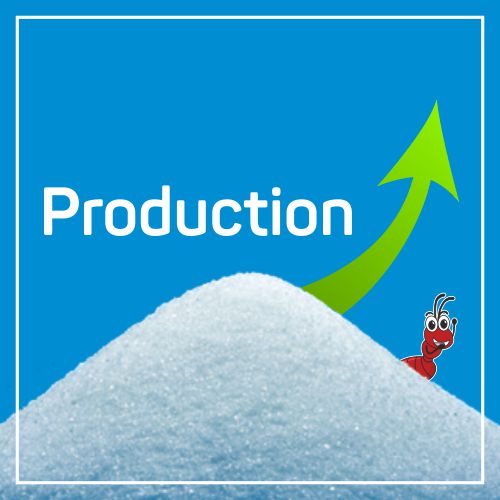 In Maharashtra, sugar production till 15th April 2021 was 103.95 lac tons, compared with 60.76 lac tons produced last year same period, almost 43.19 lakh tons higher than last year. In the current 2020-21 SS, reportedly 136 mills have closed their crushing operations in the State and 54 sugar mills are operating currently. On the corresponding date in last season, only 10 mills were in operation in the State, who went on to add about 0.9 lakh tons of sugar production last year.

In case of Karnataka, till 15th April, 2021, 66 sugar mills have produced 41.45 lac tons of sugar. As of now, all the mills have closed their operations in the State. However, few mills in South Karnataka will operate in special season from July – September, 2021. During the corresponding period last year, all the operating 63 sugar mills had closed their operations and had produced 33.82 lac tons sugar. However, in the special season last year, 1.12 lakh tons of sugar was made.

In case of Tamil Nadu, out of 27 sugar mills which operated this season, 5 sugar mills have ended their crushing so far, though some might operate in the special season later in the year. Till 15th April 2021, sugar production in the State was 5.85 lac tons, compared with 5.0 lac tons produced by 24 sugar mills on the corresponding date last year. Of the 24 sugar mills, 16 mills had ended their operations and 8 mills were in operation as on 15th April 2020, last year. In the special season last year, Tamil Nadu mills had made 2.0 lakh tons of sugar.

Of the above States, Bihar, Punjab, Chhattisgarh, Telangana, Rajasthan and Odisha have already closed their crushing operations for the current campaign, while others except Haryana are on the verge of closure shortly.

As per market reports and port information, about 29.72 lac tons of sugar have been physically exported out of the country during October,2020 – March,2021 period, as compared to about 30.64 lac tons exported in the last sugar year during the same period. However, current year exports also include about 4.48 lac tons of sugar exported under MAEQ of 2019-20 season which was extended upto 31st December, 2020. During the current year, one encouraging factor is that the mills have physically exported more than 25 lac tons in the first three months after announcement of MAEQ export policy for 2020-21 season on 31st December,2020, including about 12 lac tons in the month of March, 2021 itself. This is almost 42% of the 60 lac tons of export quota for the current year. It is also reported that about 8 lac tons of sugar is in pipeline for export in April,2021.

In the current year, major export destinations are Indonesia and Afghanistan, accounting for almost 48% of total exports.

As per information furnished by mills and estimations made by ISMA, total sales upto March, 2021 stood at 129.48 lac tons against domestic sales quota of 125 lac tons given by the Government. Last year, during the same period sugar sales were estimated at 130.29 lac tons as against sales quota of 126 lac tons, i.e. only about 0.81 lac tons higher as compared to current year. Last year, post March, 2020, sugar sales got affected due to the country wide lockdown and consequent closure of restaurants, malls, movie halls, etc., which in turn impacted the demand for sugar sweetened products like ice cream, beverages, juices, confectionaries, sweets etc.

This year, though there are night curfew and lockdowns with certain limitations in some States / regions but conditions are somewhat different, as this time restrictions are more organized and directives including standard operating procedures are already in place, due to which disruption in supply chain is expected to be minimal.