Home English Business News India’s growth to slow to 4 per cent in FY20, recover to... 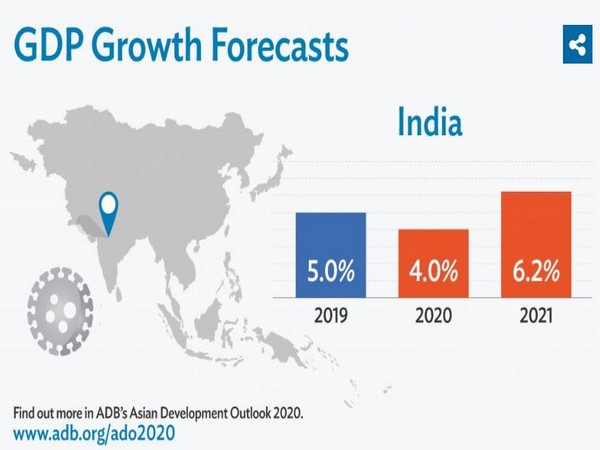 Manila [The Philippines], April 3 (ANI): The Asian Development Bank (ADB) projects India’s gross domestic product (GDP) will slow to 4 per cent in the fiscal year 2020 ending on March 31, 2021 due to a weak global environment and continued efforts to contain the novel coronavirus (COVID-19) outbreak in the country. The forecast assumes that the pandemic dissipates and full economic activity resumes from the second quarter of FY20. The Asian Development Outlook (ADO) 2020 forecasts a recovery in India’s economy in FY21 with a growth of 6.2 per cent supported by government reform. India’s economy recorded 5 per cent growth in FY19. ADO is ADB’s annual flagship economic publication.
“The COVID-19 pandemic jeopardises global growth and India’s recovery. But India’s macroeconomic fundamentals remain sound, and we expect the economy to recover strongly in the next fiscal year,” said ADB Chief Economist Yasuyuki Sawada.

“Indian authorities have acted swiftly to shore up the economy hit by the pandemic. Ongoing reforms to personal and corporate taxes and measures to strengthen agriculture and the rural economy and alleviate financial sector stress will help accelerate India’s recovery.” Risks to the outlook are firmly on the downside. A prolonged pandemic will push the global economy into a deep recession and further slow Indian growth. If the virus spreads widely within India, economic activity will be severely constrained. In late March, the government took prompt action to strengthen the health system and support the poor and vulnerable. The Reserve Bank of India has cut its policy rate to the lowest ever and committed to using all instruments to fight the pandemic.

Government initiatives introduced in late FY19 and in the FY20 Budget will aid recovery and sustain growth in the coming years. Both urban and rural consumption will be supported by reduced personal income taxes and increased assistance to the agriculture sector and rural areas. Corporate tax cuts and increased public investment in infrastructure, including the National Infrastructure Pipeline, will revive investment. The recapitalisation of state-owned banks and financial sector reform to revive credit will help alleviate much of the financial sector stress.

The report forecasts inflation of 3 per cent in FY2020 due to decreased demand and lower oil prices, and then rise to 3.8 per cent in FY21 as domestic demand improves.
With inflation expected to ease into the target zone soon, the central bank will have more headroom to support the economy. In FY20, the current account deficit is projected to narrow to the equivalent of 0.3 per cent of GDP as global growth and oil prices falter.

In FY21, imports of goods and services, supported by rising domestic demand and oil prices, are likely to outgrow exports, and the current account deficit is forecast to rise to equal 1.2 per cent of GDP. The government had committed in its FY20 Budget to a moderate path of fiscal consolidation, lowering the fiscal deficit to the equivalent of 3.5 per cent of GDP in FY20, 3.3 per cent in FY21 and 3.1 per cent in FY22. The fiscal deficit is unlikely to shrink as budgeted. However, the COVID-19 pandemic requires a fiscal stimulus to mitigate its effects and facilitate recovery, said ADB.