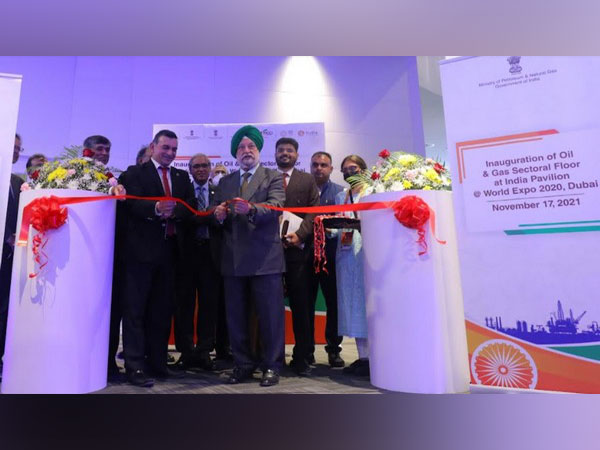 Dubai [UAE], November 18 (ANI/NewsVoir): India’s Minister of Petroleum and Natural Gas & Housing and Urban Affairs, Hardeep Singh Puri yesterday said that India is on track with its transition from a fossil-fuel-based to a green economy.

Interacting with media in the India Pavilion at EXPO2020, the minister said, “What is happening in India is truly remarkable. In the coming decades, the transition from a fossil-fuel-based economy to a green economy will come from within the existing structure and the oil companies will facilitate that.”

Puri also inaugurated the Ministry of Petroleum and Natural Gas section of the India pavilion at EXPO2020, and invited the Gulf Cooperation Council (GCC) countries and others to invest and participate in this transition.

The minister said that the country’s strategic relationship with the UAE is very important, adding that the real growth will now come from India. “If there is opportunity in the world, it is in India. We are extending an open invitation to everyone operating in the oil and gas sector to come to India. The transition from fossil-fuel to green energy has to be organised in a way that, it is a win-win for all,” he added.

The minister said that India is moving ahead with its plans on bio-fuel and green energy, and added that, “In 2014, when Narendra Modi became Prime Minister, only 1% or less than 1% of ethanol blending was taking place.”

He said that EXPO2020 is a huge opportunity to strengthen Indo-UAE relationship. “This EXPO is taking place at a very interesting time, India is celebrating 75 years as an independent country. And very soon the UAE, which is a close friend, and a strategic partner will also be celebrating 50th year of its foundation,” said Puri.

This story is provided by NewsVoir. ANI will not be responsible in any way for the content of this article. (ANI/NewsVoir)