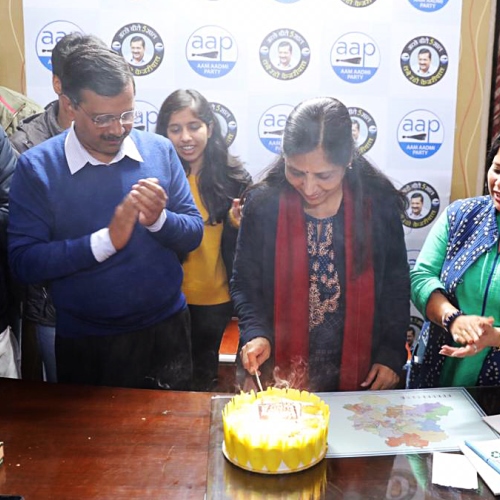 New Delhi [India], Feb 11 (ANI): Arvind Kejriwal on Tuesday greeted a large number of supporters gathered outside his party’s headquarter in Delhi and termed AAP’s victory in Delhi as a win for the people who consider ‘him as their son’.

Addressing his supporter amid a euphoric atmosphere at party’s Rose Avenue office, Aam Aadmi Party convener Kejriwal said, “I thank people of Delhi for reposing their faith in AAP for the third time. This the victory of the people who consider me as their son and voted for us.” “This is the beginning of a new kind of politics. This is a new sign”, he added.

Flanked by wife Sunita Kejriwal, AAP Rajya Sabha MP Sanjay Singh and newly elected MLA Raghav Chaddha, he said, “I thank all the citizens of Delhi and all our party workers. Our party workers continued to work throughout day and night. My family also supported me through this electoral battle. Today is also the birthday of my wife.”

AAP has retained power in the national capital with a comfortable lead on 62 seats out of the total 70, as per the Election Commission website. Its main contender BJP was far behind at 8 while the Congress is looking to draw a blank, repeating its 2015 debacle.