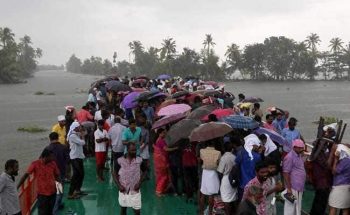 THIRUVANANTHAPURAM: The Kerala government on Saturday stepped up its vigil in view of the possibility of heavy rains following formation of a depression over south-east and adjoining east-central Arabian Sea.
According to the IMD, the depression is likely to intensify into a cyclonic storm in the next 24 hours and move northwestwards towards South Oman and adjoining Yemen coasts during the next five days.

The cell will function overnight in the Government secretariat.

The government is also closely monitoring water levels in various dams in the state.
Shutters of around 22 dams including Cheruthoni, part of the Idukki reservoir, Malamapuzha, Neyyar, Kallada and Pamba have been opened to release water as a precautionary measure in view of the heavy rain forecast.

The sea condition is expected to become rough to very rough from Saturday over southeast Arabian sea and adjoining central Arabian Sea and fishermen have been advised not to put
out to sea.

Kerala had been devastated by floods in August this year leaving a trail of unprecedented destruction and had forced people to take refuge in relief camps.

COMMENT
The South-west monsoon had claimed 493 lives in the floods, the worst in the last 100 years.