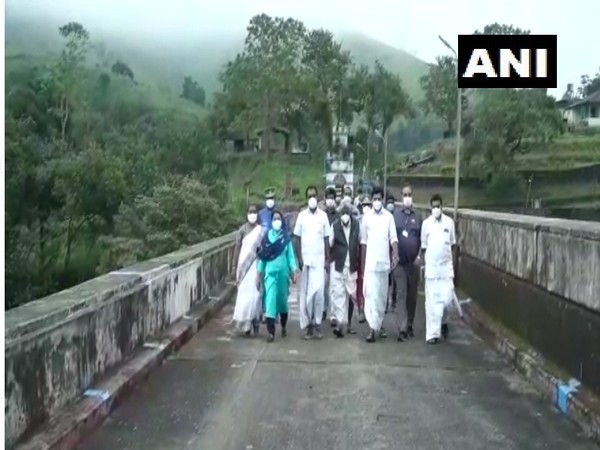 Idukki (Kerala) [India], October 29 (ANI): Amid the concern over the rise in water level in Mullaperiyar Dam due to heavy rainfall, Kerala Water Resources Minister Roshy Augustine inspected the dam site on Thursday.

Supreme Court on Thursday had asked the Kerala and Tamil Nadu governments to abide by the decision taken by Supervisory Committee regarding the appropriate water level in the Mullaperiyar dam on the Periyar river in Kerala.

The top court was hearing petitions filed by Kerala-based parties seeking urgent directions to restrict the water level in the 126-year-old Mullaperiyar dam, which is being managed by Tamil Nadu for drawing water to its districts.

The supervisory committee has recommended maintaining the Mullaperiyar dam water level at 139.5 feet.

Kerala wants the court to direct Tamil Nadu, which manages the dam, to not allow water stored to cross 139 feet. The government has said the increase in water level and its eventual release would risk flood and endanger the lives of lakhs of people in Kerala.

It has also asked that directions be issued to keep the upper water level at 139 feet till the next date of hearing. The government has said that in 2018 the top court had ordered that during flood situations, the water level should not go beyond 139.

Tamil Nadu government stated that it has no difficulty maintaining the level at 139 feet till November 10.

Tamil Nadu government has said the water level in the dam was 137.6 feet and argued that Kerala was exaggerating the situation. The rains had already stopped and there were top court judgments that fixed the maximum water level at 142 feet.

Meanwhile, dam authorities in Kerala are taking cognizance of the situation arising out of the torrential rainfall. Shutters of several dams have been opened to prevent them from overflowing. According to official estimates, heavy rains in the state have claimed the lives of 27 people. Of these, 14 deaths were reported in the Kottayam district, 10 in the Idukki district, and one each in Thiruvananthapuram, Thrissur, and Kozhikode districts. (ANI)