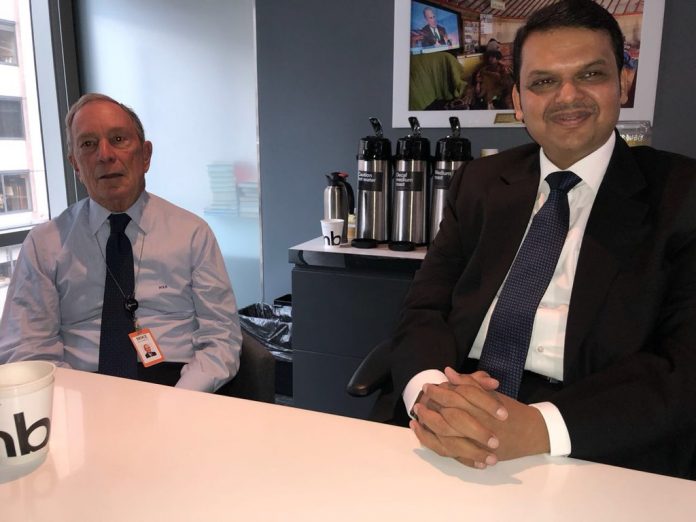 Maharashtra Chief Minister Devendra Fadnavis met Bloomberg CEO Mike Bloomberg in New York and discussed expansion of the road safety initiative supported by the US-based company for which an MoU was signed in Mumbai in February 2015.

“Substantial progress is seen with this initiative and many achievements were reviewed. This initiative resulted in less number of deaths in road accidents. Mike Bloomberg expressed intentions to work jointly with FinTech startup companies during discussions with Fadnavis,” a statement from Chief Minister’s office said today.

Fadnavis is currently on a week-long visit to Dubai, Canada, and the United States.
The Maharashtra government and Bloomberg Philanthropies had signed an agreement in 2015 to improve traffic situation in Mumbai over the next five years. In 2015, Mumbai had figured among the ten cities in the world that were funded by the Bloomberg Philanthropies, a
New York-based foundation, to adopt best of the Road Safety practices worldwide.

The selection was made from 20 strong applicant cities, mostly from countries which showed strong commitment to reduce road traffic fatalities and injuries within and around their urban set-ups.

During deliberations yesterday, Fadnavis and Bloomberg reviewed and discussed the progress of this initiative.