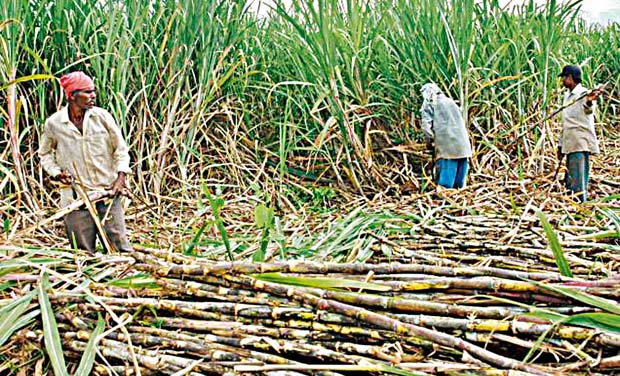 Despite a bumper production this season, farmer bodies in Maharashtra have alleged that cane farmers in the state are making losses with sugar factories arbitrarily cutting harvesting and transportation costs from their dues.

According to Swabhimani Shetkari Sanghatana (SSS), the farmer outfit led by Kolhapur MP Raju Shetti, farmers have ended up with losses to the tune of around `1,100 to `1,500 crore on account of the H&T costs.

“Sugar millers have deducted H&T costs ranging from Rs 500 per tonne to Rs 1,115 per tonne from the Fair and Remunerative Price ( FRP) payable to cane farmers . The cost of fuel and labour is uniform across the state and millers are also protected by the reserved areas from they can procure cane. It is assumed that the mills harvest cane from the reserved areas. Hence the variation of nearly `600 per tonne in H&T costs is unacceptable,” Yogesh Pande, spokesperson of the Sanghatana said.

Ravi More, a member of the body alleged that millers in Ahmednagar district had cut H&T dues to the tune of Rs 850-Rs 950 per tonne.

“There are 19 sugar mills in Ahmednagar district and farmers in this region are not united as a result of which factories end up charging arbitrarily,” he alleged.

Last year, the formula to calculate H&T costs was finalised at the meeting of the Cane Control Committee where two slabs — 0 to 25 kms and 25 to 50 km — were finalised to deduct H&T costs. Pande said that the farmer body has urged Maharashtra sugar commissioner not to approve the deducted cost of H&T, which is above the prescribed rates. Farmers in the state will end up losing nearly Rs 1,500 crore through H&T costs, he alleged. SSS has also claimed that figures of FRP dues were incorrect since some of the millers who had not paid FRP dues since February were shown as nil arrears.

Senior officials at the commissionerate said that the average H&T costs imposed by millers on farmers is in the range of Rs 600 per tonne. Depending on the area from which the cane is purchased, which sometimes could exceed the 25 km radius distance prescribed by the state, H&T costs could also rise to Rs 800 to Rs 1,100 per tonne. One has to look at the total FRP dues and not focus on H&T figures, the officials said, adding that the total FRP dues in the state has come down to Rs 1,158 crore by June 30, 2018.

According to the officials, the total FRP in Maharashtra was Rs 21,289 crore and millers in the state have paid Rs 20,699 crore which leaves Rs 1,158 crore dues. This amount also would have been paid but for the falling sugar prices and falling valuations by cooperative banks which led to short margins of nearly Rs 450 crore. Now that the short margin amount has been nullified, the millers are expected to pay the remaining amount of FRP within the next three weeks, the officials stated.

When contacted, Sanjay Khatal, MD, Maharashtra State Cooperative Sugar Factories Federation ( MSCSFF) said that the H&T cost figures shared by SSS were extrapolated.
“The average H&T costs usually come upto Rs 500 to Rs 700 per tonne,” he said. Khatal maintained that millers do not deduct H&T costs to farmers in an arbitrary manner and the deductions are done as per books of accounts, adding there is no randomness.

“However, the federation has been seeking an average H&T deduction since the cooperatives usually work on the fundamentals of no profit no loss. Sometimes a farmer from a nearby area gets less H&T deductions and farmers coming from far off regions have to bear more transportation costs. The Aurangabad court has ruled that farmers should get same rates and therefore the federation has been seeking the concept of average H&T costs to be deducted from the farmer’s cane dues, ‘ he said.

Meanwhile, the SSS has decided to take up the issue and plan to meet the sugar commissioner soon to discuss pending FRP dues and H&T deductions from farmer dues. The body also took out a morcha to protest against pending farmers dues. SSS has given the sugar mills another 15 days to clear the pending dues failing which the association has sought Revenue and Recovery Certificate (RRC) against erring millers. If the millers do not clear the dues by June 21, the association plans to sit before the sugar commissioner and ensure that action is taken against the millers, Shetti stated.