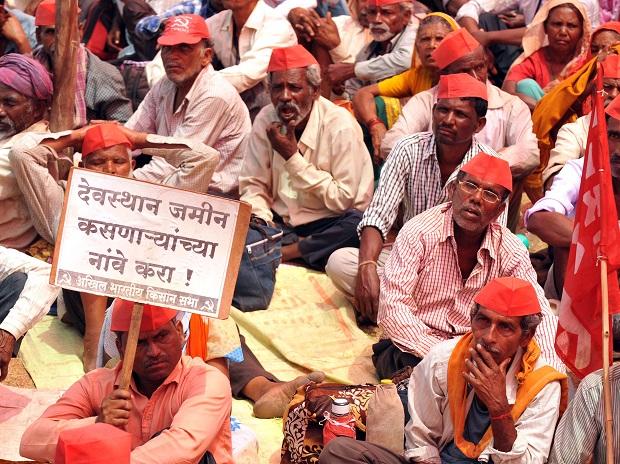 Most agricultural commodities produced in Maharashtra are trading at much lower prices than earlier and, in many cases, is not remunerative enough for its farmers, currently on a public agitation for more favourable policies.

The principal crops in the state are rice, jowar, bajra (both millets), wheat and various varieties of pulses. The state is also a major producer of oilseed — groundnut, sunflower, soybean. Among the cash crops are cotton, sugarcane and turmeric. Among vegetables, onions.

There has been some improvement in prices of oilseed and gram after the central government increased their import duties. However, small and marginal farmers have generally not got much relief.

The state’s sugar production is estimated to increase from 4.2 million tonnes last year to 10.1 mt this year. However, sugarcane payment arrears to farmers had risen to Rs 23.7 billion as on end-February, from Rs 26.2 million last year at the same time, according to official data. With sugar prices falling, the situation will worsen.

Onion is another commodity whose price falls when output rises. On Monday, at the major Lasalgaon wholesale market near Nashik, it traded at Rs 7.6 a kg; poor quality was Rs 3 akg.

A few months earlier, the price was Rs 35 a kg. The state’s directorate of onion and garlic research has advised growers to store onions, to only sell when the supply season starts drying from May onward. Maharashtra produces a fourth of the nation’s output.

Cotton is another major crop where Maharashtra is the country’s second largest producer. Output is estimated to be lower than last year, at 8.1 million bales of 170 kg each; last year’s was 8.8 mn bales. The loss is due to pest attack; farmers say it has affected the genetically modified variety, too. And, though outout is down, farmers complain of lower realisation here, too.

As for pulses, prices have been under pressure for two years; import is blamed. Last September, the central government restricted import of several varieties; import duty has been raised, too, for chana (chickpea). However, the latter’s price in the state’s wholesale markets is still below the government-set Minimum Support Price.