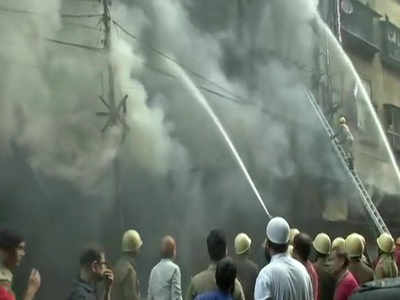 A major fire broke out in Kolkata’s Bagri market in the early hours today 30 fire tenders are at the spot trying to douse the fire at the market located in Canning Street, a major trading hub in Kolkata. Reports said that the disaster management group of Kolkata Police and civil defence unit are also at the spot to help douse the fire.

“The fire broke out at 2.45 am. We are trying our best but firefighting operation is tough here because of the number of buildings. No injuries have been reported,” said Sovan Chatterjee, Mayor, Kolkata. According to a report the fire started at ground floor of the five-storied building and spread rapidly due to huge stock of inflammable articles.” The building houses several medicine shops, jewellery and cosmetics trading outlets, the report said.

Meanwhile, Kolkata Traffic Police have closed roads around the area. In a tweet, the DCP Traffic, Kolkata, said, “Due to a fire incident, Rabindra Sarani in between MG Road and Podder Court and Canning Street in between Brabourne Road and Rabindra Sarani is closed to traffic.”

Brazil’s sugar production down in July

ChiniMandi - Wednesday, 28 July 2021
Sao Paulo: Industry group Unica said on Tuesday that sugar output in the centre-south (CS) region of Brazil has lowered by 2.8 per cent...