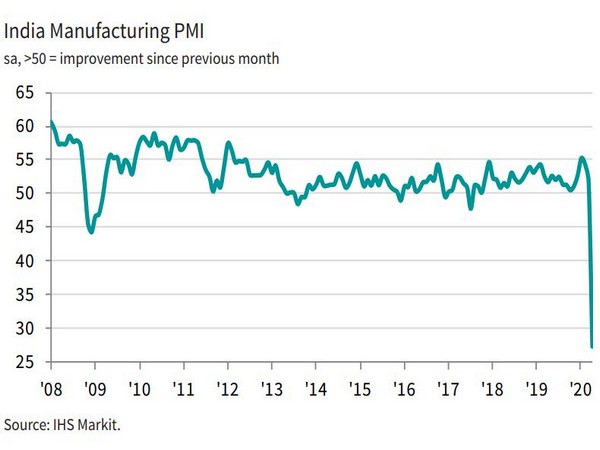 New Delhi, May 4 (ANI): There was an unprecedented contraction in Indian manufacturing output during April amid the national lockdown restrictions to help stem the spread of the coronavirus disease 2019 (COVID-19) which in turn led to widespread business closures.

In an environment of severely reduced demand, the new business collapsed at a record pace and firms sharply reduced their staff numbers. Meanwhile, both input costs and output prices were lowered markedly as suppliers and manufacturers themselves offered discounts in an attempt to secure orders.

At 27.4 in April, the seasonally adjusted IHS Markit India Manufacturing PMI fell from 51.8 in March. The latest reading pointed to the sharpest deterioration in business conditions across the sector since data collection began over 15 years ago.

The decline in operating conditions was partially driven by an unprecedented contraction in output. Panellists often attributed lower production to temporary factory closures that were triggered by restrictive measures to limit the spread of COVID-19.

Amid widespread business closures, demand conditions were severely hampered in April. New orders fell for the first time in two-and-a-half years and at the sharpest rate in the survey’s history, far outpacing that seen during the global financial crisis.
Total new business received little support from international markets in April, as new export orders tumbled. Following the first reduction since October 2017 during March, foreign sales fell at a quicker rate in the latest survey period.
Deteriorating demand conditions saw manufacturers drastically cut back staff numbers in April. The reduction in employment was the quickest in the survey’s history. There was a similar trend in purchasing activity with firms cutting input buying at a record pace.

Eliot Kerr, Economist at IHS Markit, said after making it through March relatively unscathed, the Indian manufacturing sector felt the full force of the coronavirus pandemic in April.

“In the latest survey period, record contractions in output, new orders and employment pointed to a severe deterioration in demand conditions. Meanwhile, there was evidence of unprecedented supply-side disruption, with input delivery times lengthening to the greatest extent since data collection began in March 2005.”

There was a hint of positivity when looking at firms’ 12-month outlooks, with sentiment towards future activity rebounding from March’s record low, he said. “The degree of optimism remained well below the historical average.”
The IHS Markit India Manufacturing PMI is compiled from responses to questionnaires sent to purchasing managers in a panel of around 400 manufacturers. The panel is stratified by detailed sector and company workforce size, based on contributions to GDP.