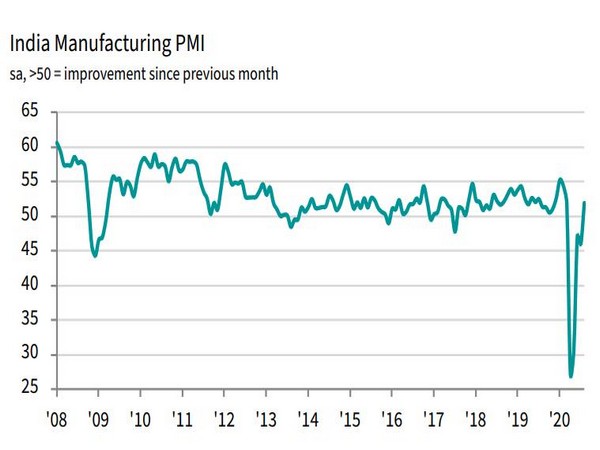 New Delhi, September 1 (ANI): Indian manufacturers signalled a rebound in production volumes and new work in August, according to the latest PMI data released on Tuesday.

The upturn was led by an improvement in customer demand as client businesses reopened after lockdown restrictions eased amid the coronavirus disease 2019 (Covid-19). Output and new orders expanded at the fastest paces since February.

At 52 in August, the headline seasonally adjusted IHS Markit India Manufacturing Purchasing Managers’ Index (PMI) rose from 46 in July and signalled an improvement in operating conditions across the manufacturing sector following four consecutive months of contraction.

For the first time since March, output expanded in the Indian manufacturing sector in August. Production growth was largely driven by greater client demand for Indian goods following the resumption of business operations, according to firms.

Despite an expansion in new orders, job shedding continued in the Indian manufacturing sector. The relocation of employees following Covid-19 was often linked to the reduction in staffing numbers. The pace of contraction in workforce numbers softened from that seen in July but remained strong overall.

Capacity restraints in employment drove the rise in incomplete work at Indian manufacturers midway through the third quarter. The rate of increase in backlogs was the fastest since December 2012.

Economist at IHS Markit Shreeya Patel the pick-up in demand from domestic markets gave rise to upturns in production and input buying.

“However, not all was positive in August. Delivery times lengthened to another marked rate amid ongoing Covid-19 disruption. Meanwhile, employment continued to fall despite signs of capacity pressures as firms struggled to find suitable workers.”

Looking ahead, Indian manufacturers remained optimistic for the next 12 months. Positive sentiment was often attributed to hope of the passing of Covid-19 pandemic, improving client demand, and new business wins.

Nevertheless, market uncertainty and the onset of a global recession weighed slightly on the degree of confidence which was below the series average in August.