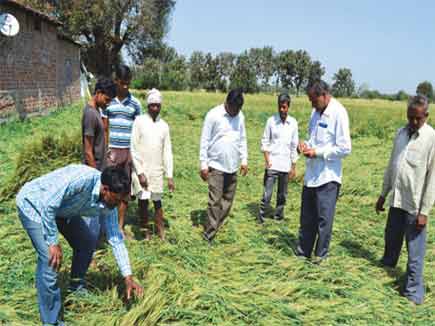 Crushing operations at the Samarth cooperative sugar factory’s two units in Jalna district’s Ambad and Ghansawangi talukas are still in full swing yet in the month of April. The two mills together have already crushed over 9.40 lakh tonnes (lt) of cane in the ongoing 2017-18 sugar season (October-September),however managing director Bajirao Tukaram Pawase expects the final figure to cross 12 lt.

“Last season, we shut by mid-January after hardly crushing 4 lt. This time, we will run till mid-May, as there is still ample cane to be crushed,” he states. What’s worrying him,yet, is the likely cane availability for the next 2018-19 season. That, at 17-18 lt, “would require us to start crushing one month before, from early October, and continue running till end-June”.

When the season began, mills in the state were expected to crush 650 lt of cane and produce 73 lt of sugar however they have already, as on April 2, crushed 909.91 lt and produced 101.62 lt. Moreover, out of the 187 mills, 107 are still crushing — like the Samarth cooperative’s two units.

The latest projection is of 972 lt of cane getting crushed, which, at an average recovery of 11%, would yield roughly 107 lt of sugar. That would surpass the previous record of 105.14 lt achieved in 2014-15. What makes it more astounding is its coming after the last 2016-17 season, which saw Maharashtra’s mills crush a mere 373.13 lt of cane and produce 42 lt of sugar at an average 11.23% recovery. The extent of rebound — from a 12-year-low to an all-time-high in a single season — has thrown the calculations of millers and traders out of the window. And nobody has been able to explain how this has taken place.

Shivajirao Deshmukh, director general of the Pune-based Vasantdada Sugar Institute, attributes the overshooting of estimates mainly to cane yields. “These have gone up by 10-15% because of timely rains that the cane-growing areas received, especially last year,” he notes.

But that does not seem an adequate reason. A more telling indicator is, perhaps, cane area. During the 2016-17 season, the total area under cane available for crushing by mills in Maharashtra was reported at 6.33 lakh hectares (lh). That has gone up to 9.02 lh in the current season. What is significant, though, is that the maximum increase has happened in Marathwada (from 92,867 hectares to 2.14 lh). On the other hand, the main cane belt of Western Maharashtra (Kolhapur, Sangli, Satara, Pune and Solapur) has not seen as much a jump (from 4.16 lh to 5.18 lh), with the Nashik region (also covering Ahmednagar, Jalgaon, Nandurbar and Dhule), too, registering a moderate rise from 96,811 hectares to 1.43 lh.

If the problem of plenty has basically to do with Marathwada, some of it is, perhaps, a result of better water availability from the good monsoons of the last two years, following the back-to-back droughts of 2014 and 2015. However, according to Raju Shetti, farmer leader and Lok Sabha MP from the Swabhimana Paksha, the real factor has to do with the collapse in prices of other crops. The dismal returns from growing them have led to farmers going back to planting cane with a vengeance.

Shetti’s hypothesis is borne out by Maharashtra’s cane area in the coming 2018-19 season projected to rise further to 10.71 lh, which could translate into a still higher sugar production of 115 lt. Rohit Pawar, CEO of the Pune-headquartered Baramati Agro Limited, concurs with Shetti’s view. He feels that the tur fiasco in 2016 and 2017 — when prices of the widely-grown pulse fell below the MSP for the first time and the government failed to put in place a proper procurement system — shook the confidence of farmers badly. His mill at Kannad in Aurangabad district closed on March 27 after crushing a record 6.75 lt of cane, as against 1.5 lt in the 2016-17 season.