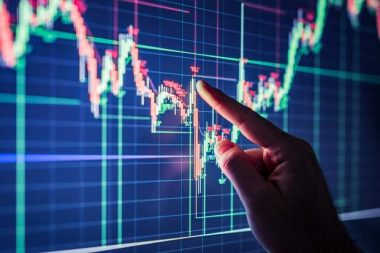 Mumbai, Dec 18 (PTI) Indian equity benchmarks reversed early losses to end in the green, marking their sixth consecutive gains, helped by late buying in mainly in pharma, metal and capital goods as firming rupee and sliding crude lifted investors’ sentiment.
The BSE benchmark Sensex ended 77 points higher despite losses in information technology and FMCG counters amid weak global cues. Similarly, the broader NSE Nifty edged higher by over 20 points to close above the 10,900-level.
In a major boost to domestic market, the Indian rupee jumped 93 paise (intra-day) to trade at 70.63 against the US dollar and the benchmark Brent crude dropped to  57.98 a barrel, a fall 2.73 per cent, easing India’s concerns on the current account deficit front.
“Market reversed from day’s low despite weak global market as oil prices slid further and a drop in bond yield raised investors’ confidence. Global market traded on a negative note due to concerns of slowdown in world economy growth. Strong rupee and fall in yield is easing the liquidity concerns of the market,” Vinod Nair, Head of Research, Geojit Financial Services Ltd, said.
The BSE Sensex swung almost 329 points both sides on hectic selling and buying during the session.
The 30-share index started lower at 36,226.38 and continued to slide as selling pressure gathered momentum and hit a low of 36,046.52 in line with a weak trend in Asian markets and lower opening of European shares.
However, hectic buying in late afternoon trade reversed the day’s losses and helped the Sensex scale 36,375.38 before settling 77.01 points, or 0.21 per cent, higher at 36,347.08. The gauge had risen over 1,310 points in the last five sessions.
The 50-share NSE Nifty too rose by 20.35 points, or 0.19 per cent, to end at 10,908.70. Intra-day, it traded between 10,819.10 and 10,915.40.
Sun Pharma emerged as the best performer in the Sensex pack, surging 2.98 per cent, followed by PowerGrid at 1.74 per cent.
Other gainers were M&M 1.62 per cent, Vedanta 1.58 per cent, Asian Paints 1.47 per cent, L&T 1.42 per cent, SBI 1.35 per cent, ICICI Bank 1.22 per cent, NTPC 1.20 per cent, Kotak Bank 1.08 per cent, Bharti Airtel 0.91 per cent, Tata Steel 0.76 per cent and Maruti Suzuki 0.64 per cent.
RIL, Hero Motocorp, Axis Bank, Tata Motors, Adani Ports, Coal India, HDFC Bank, IndusInd Bank and Bajaj Auto also showed strength and gained up to 0.62 per cent.
On the other hand, shares of software exporters such as Infosys, Wipro and TCS lost up to 2.48 per cent due to stronger rupee.
Other losers in the Sensex were ONGC, HDFC, HUL, ITC and Yes Bank.
Stocks of state-run oil marketing companies such HPCL, BPCL and IOC surged up to 2.75 per cent on the back of easing crude oil prices in global market. Shares of aviation companies like Spicejet and InterGlobe climbed up to 7.44 per cent, largely supported by easing crude prices.
Among sectoral indices, the BSE infrastructure gained the most by rising 1.11 per cent, followed by power at 1.09 per cent, capital goods 1.09 per cent, PSU 1.07 per cent, metal 0.90 per cent, auto 0.66
per cent, healthcare 0.47 per cent, oil and gas 0.42 per cent and realty 0.26 per cent.
However, teck and IT indices emerged as the worst performers by falling up to 1.13 per cent on account of appreciating domestic currency.
According to provisional data, domestic institutional investors sold shares worth a net of Rs 76.84 crore, while foreign institutional investors (FIIs) offloaded shares to the tune of Rs 60.95 crore Monday.
Globally, stocks slipped into the red tracking overnight sharp losses at the Wall Street as investors continued to fear weakening growth amid caution ahead of the US Federal Reserve’s two-day meeting, beginning Tuesday.
The US Federal Reserve’s policy decision is expected on December 19 and the market is expecting another rate hike, traders said.
In Asia, Japan’s Nikkei fell 1.82 per cent. Hong Kong’s Hang Seng dropped 0.90 per cent, Shanghai Composite Index fell 0.82 per cent and Korea’s KOSPI fell 0.43 per cent. European shares too were in the negative zone in their early deals.  Paris CSCV 40 fell 0.72 per cent, whie Frankfurt’s DAX shed 0.30 per cent. London’s FTSE too down 0.82 per cent. The US Dow Jones Industrial Average ended 2.11 per cent down Monday.