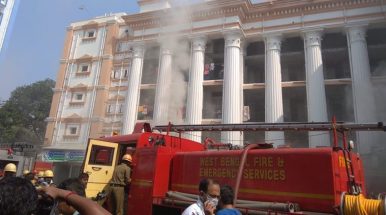 ChiniMandi (03 Oct): On Wednesday morning, the fire broke out at Medical College and Hospital in Kolkata. In order to douse the fire, ten fire tenders are sent at the spot. At least 250 people are evacuated from the scene to be taken to a safe spot and yet no casualty has been reported. As per the sources, the fire broke out at Pharmacy department in early morning. Smoke took over the ground floor of the hospital’s main building where the dispensary is housed. Many of the patients tried to jump out of the building windows to save themselves. Footage by local media shows some of the patients being taken out from the spot with their saline drips. A disaster management team of the Kolkata Police, fire officials and senior officials are at the scene. A senior fire official said the fire has been brought under control.