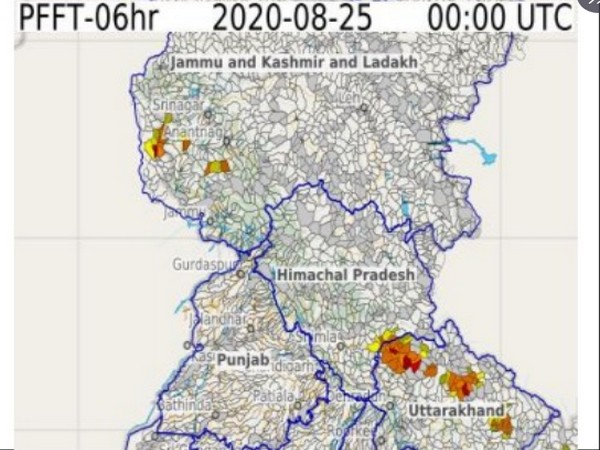 New Delhi, August 25 (ANI): Some areas of Jammu and Kashmir and Uttarakhand are at moderate risk of flash floods for the next six hours, the Central Water Commission (CWC) informed on Tuesday.

“Flash Flood Guidance issued by IMD valid for 6 hours from 0530 hrs on August 25, 2020 in Jammu and Kashmir and Uttarakhand is appended. Moderate threat over some watersheds and neighbourhood areas of Puch, Reasi and Ramban districts of Jammu and Kashmir subdivision and Uttarakashi, Rudraprayag, Chamoli and Bageshwar districts in Uttarakhand subdivision,” the CWC tweeted.
In another tweet, the Commission further warned of flash flooding in Gujarat in the next 12 hours.

“Flash Flood Guidance for next 12 hrs issued at 0530 hrs IST issued by IMD is appended. Moderate risk over few areas of Gujarat and Saurashtra and Kutch sub-division,” it tweeted. (ANI)