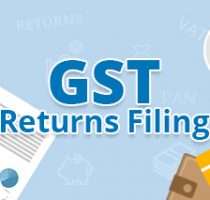 A ministerial panel, chaired by Sushil Modi, today worked out a new simplified model for GST return filing as per which credit could be given on a provisional basis once the supplier uploads the sales invoice.

As it looks to finalise a single-page return form for businesses under GST, the panel today met about 40 industry representatives and 15 tax tax experts to discuss simplification of return filing process.

Briefing reporters after the meeting of the Group of Ministers, Modi said a “fusion” model of return filing after incorporating stakeholder suggestion has been worked out, which will be placed before the GST Council for approval.

One of the models presented before the council was provisional credit should not be granted unless the taxpayers file returns and pay taxes.

The second model stated that provisional credit could be granted to a taxpayer, but returns have to be filed within 3-4 months and taxes have to be paid or else the credit amount would be reversed.

After consulting the stakeholders today, the GoM today worked out a third model for return filing as per which credit could be extended once the invoice uploaded by the supplier is verified by the purchaser on the GSTN portal.

Explaining the contours of the “fusion” model, an official said that the Central Board of Indirect Taxes and Customs (CBIC) is now working on mechanism to deal with instances of non payment of taxes even after availing credit.

The official said the model, being drafted by the tax officers, would be to sent notices to taxpayer in case he fails to pay the due taxes seeking explanation, following which the credit could be reversed.

Modi said there was unanimity in the GoM that businesses would have to file only one return every month, instead of GSTR-1, 2 and 3 as was conceived earlier.

Also there was unanimity that there would be no system based matching and purchaser would have to verify the invoice uploaded by the seller.

Modi said the model for simplified return filing that is being worked out would safeguard the interest of revenue to the exchequer, and avoid inconvenience to the taxpayers.

As per the structure being worked out by the Centre and state officials as well as Nandan Nilekani, businesses having zero tax liability for six consecutive months may get to file returns only twice a year.

The return filing date would be spread out and businesses having annual turnover of up to Rs 1.5 crore will have to file return by 10th of next month, while others can file return by 20th.

The number of returns filed by both small and large taxpayers would be 12 in a year, in place of 36 at present.